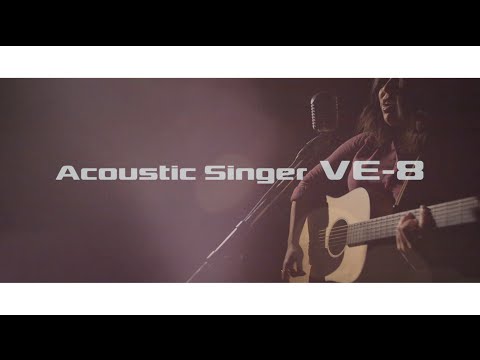 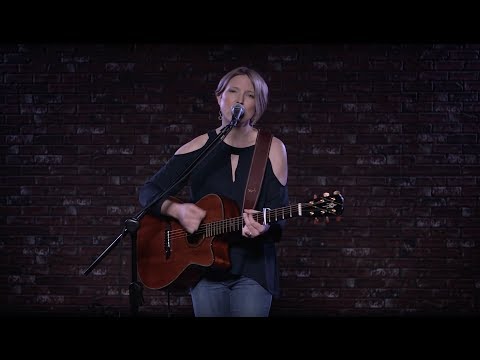 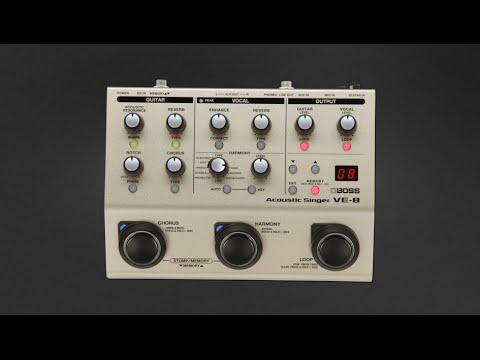 Scan code: LN82519 Manufacturer code: VE-8
Share Facebook Twitter Google Reddit Pinterest LinkedIn
£319.00Item overdue since 25 October 2021
Pre Order
Pre order
FREE DELIVERY ON YOUR ENTIRE BASKET
From £14.11 / month (APR 5.9%) or 0% for 4 months
If you are approved for a credit limit with PayPal Credit and use it for future purchases, the APR for those purchases won't be more than 21.9% and may be even lower. The Definitive Solution for Singer Songwriters If you’re a singer/songwriter playing acoustic guitar, you’ll be well aware it can at times seem a very crowded and competitive market out there. It’s often the artists who have a unique selling point that find themselves making waves and ‘making it’. Enter the ‘VE-8’ from illustrious stompbox kings Boss. The VE-8 will help you gain the extra edge you need to turn heads and make people stop and listen. Easy to use, Boss’s VE-8 is full of studio-grade voice and guitar effects, plus, is able to provide harmonies and loops in real time, all in one convenient, tough as nails chassis. When you have tools like this at your disposal, you’re guaranteed to turn heads.

Stand Out From The Crowd

Studio grade vocals With the VE-8 in tow, Boss have made it simpler than ever to attain studio grade vocal sounds straight from the off. It’s as easy as plugging your mic into the sturdy XLR input and add a little ambience, clarity or control with the VE-8’s ‘Enhance’ function. Still not enough? Go one step further and sprinkle a little electronic/synth sounds to your voice, distortion, or anything else that takes your fancy, and really ensure you stand out from the crowd. Studio grade guitar tone Utilising the VE-8’s guitar channel, your acoustic guitar will sound just as awesome as your vocals. Turning up the ‘Acoustic Resonance’ brings out your guitars natural sound, ridding your tone of any stale piezo ‘quack’ sound that is commonly found with the usual undersaddle pickups in electro acoustics. All the usual Boss effects are on hand too to further develop your sound such as Reverb, Delay, as well as effects that you might consider more ‘experimental’ on your acoustic guitar such as octave, modulated delays etc. Feedback issues are also a thing of the past now thanks to the built in phase switch and notch filter.

The VE-8 is packed with awesome features. One of the more interesting ones perhaps is the specifically designed looper mode. Simply hit the dedicated footswitch, and let your imagination run wild. Try laying down a percussive rhythm on the body of your guitar, chord progression or a vocal part, this is where true creativity lies. Choose your guitar, voice or even both, for inventive loops guaranteed to make people stop and listen. Imagine performing solo on a busy city centre street, or on a stage at your local venue. Only now, you’re able to layer your voice with harmonies. Sound cool? The VE-8 can deliver this. With an 80 second looper function, you're only limited by your imagination. The automatic harmony mode automatically learns which key you’re playing in and generates the harmony you need as you perform. Add some harmonised melodies to your songs, experiment with different backing vocals. There’s even a handy vocal doubling tool, brilliant for adding a fuller sound and presence to your vocal if and when required. Bring a band to the solo stage.

The rear of the VE-8 features an input for guitar and an XLR input for your vocal mic, including a switch to enable phantom power. Also featured is an auxiliary input to allow connection of a media player or phone to provide backing tracks should you need. A pair of XLR balanced outs are there to give a direct feed to an in-house PA, whilst stereo ¼” jack outputs allow you to send a different signal to on stage monitors or an on stage acoustic amplifier.

Both channels, guitar and vocal have a 3 band EQ to allow you to sculp your tone and any other fine tweaks you may desire to add, as well as a low cut filter. It’s even possible to send both channels to an external mixing facility via the XLR outputs. What’s more, you can use the VE-8 as a recording interface with your chosen DAW.

Levinson 'Elegant understatement' best describes the All-Mahogany LG-222 from Levinson. With this guitar, you can sound the part and look the part. Levinson guitars are famous for being beautifully crafted, and it shows. Boss VE-8 Acoustic Singer, Studio-Quality Voice and Guitar Processing, Real-Time Harmonies, Looping is rated 4.0 out of 5 by 1.
Rated 4 out of 5 by Cols from Great bit of kit excellent service Takes a bit of work to get the results you want but the boss does everything I need and more....I play guitars mandolin and ukes, the acoustic resonance feature lets me get a good sound from any instrument I have plugged in! The vocal enhancements help my voice, the effects are more than enough for an acoustic instrument (A compressor effect would have been good) The loop pedal is a bit scary to use live but a bit of practice and I will get more confident. The first time I used the harmoniser it freaked me out a bit but I have settled in to using it and when used with the vocal loop you can easily build a deep and complex sound. Like all these things less is more. The boss is boss relatively easy to use an the service from this supplier was excellent
Boss VE-8 Acoustic Singer