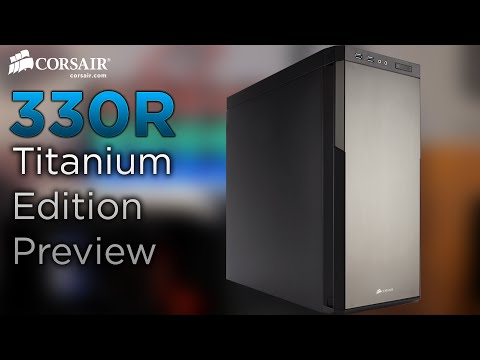 The Carbide Series 330R Titanium Edition starts with the award-winning original 330R, and adds a brushed aluminum front panel with a three-speed fan controller. It’s designed for systems that will go into media rooms, bedrooms, dorm rooms, or any place where both silence and performance are essential. Sound damped doors and panels and clever intake fan design are combined with generous expansion room and builder-friendly features to allow you to build a silent PC that can pack a lot of power for gaming and high-definition media streaming. The 330R Titanium Edition incorporates a direct path between the included 140mm fan and your CPU and GPU, providing cold air directly to the hottest components with less restriction and less noise. Great airflow doesn't have to be noisy. The fans can push good amounts of air across your hottest devices with less distracting fan hum, and the three-speed fan controller lets you decide exactly how fast they run. This case comes with 2 fans included, at the front it hosts a 140mm fan and at the rear is a single 120mm fan.

The 330R has room at the top for radiators, allowing you to quiet down your GPU and CPU with liquid coolers, this also allows you to get better overclocks out of your components for better quality gaming.

The length for the radiators that are compatable with the 330R case are as follows:
280mm: Top only / 240mm: Top only.