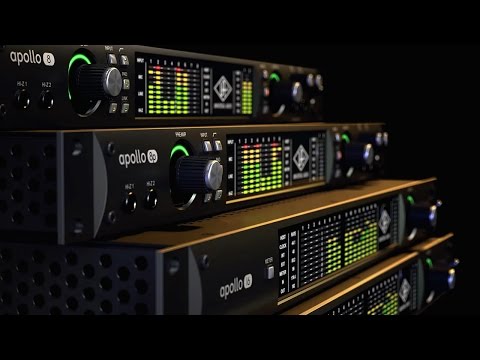 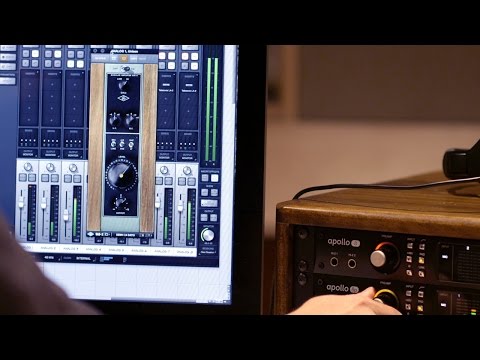 World-Class Sound with Superior Apollo A/D and D/A Conversion
The original Apollo, introduced in 2012, quickly became a gold standard among modern music producers and engineers — it now counts many of the world’s top artists as users. Apollo 8 improves upon the original Apollo’s sound quality with completely redesigned, class-leading A/D and D/A conversion — giving you increased dynamic range and even lower THD. Building upon a 50-year legacy of circuit design, UA engineers started with an obsessive audition of the latest converters, pairing them with completely redesigned analog circuitry. Confirmed by extensive double-blind listening tests, the end result is 3 dB better dynamic range on both A/D and D/A conversion versus the original Apollo, placing the Apollo 8 as the measurable class leader.

The key to its analog sound is onboard UAD-2 DUO or QUAD DSP Processing, which powers the UAD plug-ins while reducing the strain on your host computer.

Apollo 8 comes bundled with “Realtime Analog Classics Plus” suite of UAD plug-ins. From there, you can choose from a vast and expanding collection of plug-ins in the UA Online Store.

Front & Rear Panels
The Apollo 8 interface places all the most commonly used recording and monitoring features right on the front panel, for fast, direct access. Similarly, its rear panel provides all the dedicated, high-quality I/O needed for a typical production studio.

The secret to Unison is its hardware-software integration between Apollo’s mic preamps and its onboard UAD-2 processing. Simply place a selected tube or solid state preamp plug-in on your desired mic input, and record in real time through stunning emulations like the bundled UA 610-B Tube Preamp plug-in, or the Neve 1073 and API 212L.

Improved Monitoring and Workflow
Apollo 8 features a host of front-panel upgrades over the original Apollo, including Alt Speakers, Dim, and Mono functions as well as input and output metering capabilities.

UA 610-B Tube Preamp and EQ
The 610-B Tube Preamp and EQ plug-in will impart your tracks with the same legendary warmth and character of the classic hardware unit used to track everyone from Duke Ellington to Coldplay. By emulating the entire signal path, including tube amplifiers, transformers, and circuit nonlinearities, the 610-B Tube Preamp and EQ plug-in injects glowing detail and saturation to any signal — whether you’re re-amping or tracking through the 610-B via Universal Audio’s breakthrough Unison™ technology — the first and only way to truly emulate classic analog mic preamp gain stage “sweet spots,” and component-level behaviors at the input stage.

Raw Distortion Plug-In
Modeled from a vintage early-’80s Pro Co Rat, the Raw Distortion plug-in delivers all the gritty dynamic raunch of the legendary stompbox. And with Unison™ technology, you can plug in to Apollo Twin, DUO, or QUAD and experience the same circuit interaction, gain range, and clip points for the true tone, feel, and response of the original hardware.

Softube Amp Room Essentials
Featuring two plug-ins — the Amp Room Half-Stack and the Bass Amp Room 8x10 — Amp Room Essentials gives you guitar and bass tones that can deliver the goods in any genre. Based on a vintage British half-stack, Amp Room Half-Stack yields legendary slabs of molten distortion while Bass Amp Room 8x10 offers powerful tones and features like a blend-able DI. Both plug-ins tout adjustable mic placement for fine-tuning your tones whether you’re recording in real-time or re-amping.

Fairchild 670 (Legacy)
The world’s most coveted compressor, the classic Fairchild 670 tube limiter will give your tracks and mixes unmistakable tube warmth and character. Whether you’re looking for subtle compression on a lead vocal, or grittier textures that can work on guitars, bass, or a drum bus, the Fairchild 670 plug-in will add a classic “glow” to anything you run through it.

1176SE/LN Classic Limiting Amplifiers (Legacy)
Get classic, ultra-fast FET compression from the world’s most recognized compressor. The 1176 will impart punch, presence, and character as well as its signature distortion overtones on drums, vocals, guitars, and bass. The 1176LN has graced countless recordings, from Led Zeppelin, to the White Stripes, and the Red Hot Chili Peppers.

Pultec Pro Equalizers (Legacy)
Universal Audio’s Pultec Pro Legacy plug-in combines the Pultec MEQ-5 Midrange Equalizer and the Pultec EQP-1A Program Equalizer, two of the most sought-after hardware EQs, into a single plug-in. The MEQ-5 EQ section allows you to boost and cut midrange bands with the same silky smoothness and personality of the original hardware while the EQP-1A imparts warm analog character to a single track or an entire mix — even when bypassed.

CS-1 Precision Channel
Featuring the EX-1 EQ/Compressor, the DM-1 and DL-1L Delay Modulators, and the RS-1 Reflection Engine, the CS-1 Channel Strip provides all the tools you need for recording and mixing in one simple plug-in. With a unique smoothing algorithm for all controls and DSP conserving bypass switches built-in, the CS-1 packs a whopping punch into a small package.