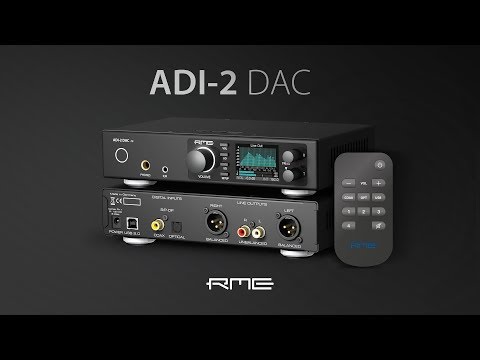 Scan code: LN86745 Manufacturer code: ADI-2
Share Facebook Twitter Google Reddit Pinterest LinkedIn
Order now and get it tomorrow, Wed 25th May
£910.00
Add To Basket
Get it Tomorrow, 25 MayIn stock
FREE DELIVERY ON YOUR ENTIRE BASKET
From £27.58 / month (APR 5.9%) or 0% for 4 months
If you are approved for a credit limit with PayPal Credit and use it for future purchases, the APR for those purchases won't be more than 21.9% and may be even lower. RME ADI-2 DAC fs - Extreme Power Headphone Amplifier and Reference Class USB DAC, SPDIF Coax and Optical Inputs is rated 5.0 out of 5 by 5.
Rated 5 out of 5 by Timiambeing from Pro DAC for the audiophile Stop worrying about audiophile DACs and their esoteric internal architectures and just listen to unadulterated uncoloured neutral data bits! Read the reviews and forum comments and then just buy it - it’s full of features you may never use, but straight out of the box there’s enough revolutionary tried and tested pro technology in there to satisfy the most discerning listener - if you must colour your sound then be like me, do it further down the chain after this amazing DAC does it’s stuff :D
Rated 5 out of 5 by callmevil from Read the Manual! The adi-2 dac is an amazing piece of hardware but it's potential would only be realised if the user understands the plethora of functions buried in its menu/submenu trees. The provided manual goes extensively through each of these functions and additionally provides tips and guides on specific things the user may want to achieve. My only regret with my adi-2 dac was not getting the black edition pro version instead. If your input needs is only with digital ins, then the adi-2 dac is the way to go. However if you think you may need the dac to have analogue inputs as well, then do consider the pro variant. 1 thing I would've wanted changed on the adi-2 dac is the port layout at the back. I wished the xlr ports were placed directly side by side of each other instead of being divided by the rca ports. But this is to do more with my cable management peeve rather than a fault of the design tho.
Rated 5 out of 5 by adavid from Superb DAC The online reviews are excellent. This DAC sounds amazing, clear and faultless with streaming hi definition music used as DAC and pre-amp via my Rega Exon 3 power amps and Rega R9 speakers. Much better than my previous DAC
Rated 5 out of 5 by romulus1970 from Best Bang per buck DAC Great little DAC. Has all the inputs you'll need be it USB, Coaxial or Toslink. It doesn't have an AES balanced in or an I squared s but those weren't important to me but be aware just in case you want one of those inputs. I bought it for its DAC function & I'm more than happy with its performance as to my ears it sounds just that little bit more clear than my older Arcam D33, my Devialet D200 expert & my Linn Majik DSM DAC'S did. I have used the headphone Amp on it & to my ears that also sounds really good. I haven't used the DSP ability of this little thing though & don't plan to so unfortunately I can't comment on that side of things. All in all its a great small DAC in its price point & I feel that you will have to get into the £1k+ territory of DAC'S to beat it for sound quality. It's built well & looks the part too. Overall I'd highly recommend this DAC to pro users or Hi-Fi lovers alike no problems.
Rated 5 out of 5 by gregy from Probably best in class If you want a DAC/preamp/headphone driver for audio reproduction, this is a very good choice. (There are other RME products that are more suited for audio production like the ADI-2 Pro from which the ADI-2 DAC is derived.) You can find reviews linked at the RME website so I will just give my personal experience here, especially on some less obvious operational details. The unit is powered from a small brick style power supply; connector locks when rotated. Control is via IR remote control or 3 clickable rotary encoders (larger one for volume and smaller ones marked [1] and [2]) and 4 buttons on the front panel. Click a button and press up [1] or down [2] to go up or down the menu. Rotate [2] to change the highlighted item. Rotating [1] changes the submenu or there is no action if there is no applicable submenu. Not very intuitive to start with but you'll soon recognise the pattern and be able to navigate through the many options. There is a partial menu map in the included ring-bound User's Guide. You can also find overview and menu walkthroughs at RME's Youtube channel. Volume control is in 0.5 dB steps from +6.0 max down to -84.5 dB (far preferable to some gear I've used which have progressively larger steps as you turn the volume down - makes it difficult to set the correct level at low volume). Below this, steps are a bit variable (digital rounding?) but inaudible already so doesn't bother me. I use the unit with my computer connected via USB. It works with the native Windows drivers. If you install the optional RME driver (needed to update firmware), you can use their Digicheck software which will give you level meter, spectrum analyser, vector scope, etc., on the computer screen. With very low output impedance, it is rated to drive loads down to 8 ohms with output power up to 500 mW. I use it to drive my speakers directly! It's loud enough for my near-field low-moderate level listening. I just made up some speaker leads soldered to a standard 6.3 mm TRS jack plug.

Hi there, I wanted to check if the version you are selling has the new AK4493 DAC chip or the older AK4490. Many thanks

Asked by: Jez801
I bought my unit in July and can confirm that it's the new version as it came with the updated remote, the amber light option, and the +18 dBu gain. I will note that that rear left rca port color resembles the AK4490 (black colored port) instead of a white colored port as shown in brochures of the AK4493 chipped units.
Answered by: callmevil

RME says the new remote controller is available as an accessory for existing owners of the ADI2-DAC. When will this new remote controller be available from SCAN and how much will it cost? Thank yolu.
Asked by: technobear
Good Morning, Unfortunately, we do not have any information on this as of yet. Kind Regards,
Answered by: LukeW
RME ADI-2 DAC FS Headphone Amplifier