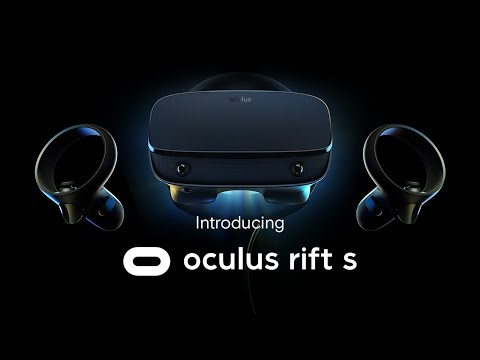 The VR Gaming Headset driven by PC PowerAre you ready to dive head-first into the future of gaming? If so, be careful to check the space around you, or you might end up with a concussion! See the action unfold around you with the latest VR headset from Oculus. The Rift S is equipped with the sharpest lenses and the next-generation optics. Lose yourself in the experience with a comfortable, improved design that lets you start playing faster and keep playing longer. Oculus Insight tracking gives you the power to move throughout your play space in any direction. No external sensors. No complicated setup. Just hands-on action and interaction with our updated Oculus Touch controllers out of the box. So, if you’re ready to take your brave first steps into the pioneering frontiers of the video game industry – the only companion you’ll need is the Oculus Rift S!

Improved Optics for bright vivid coloursOculus Rift is equipped with state-of-the-art optical technology; next-generation lenses provide the user with a sharper and clearer display, colouring your games with brighter and more vivid features and effects. The advanced hardware works with Oculus software innovations to render smooth gameplay on a wide range of PCs.

Built for Comfort and a Secure Fit

Ergonomic Design Further consideration has recently been given to the ergonomic design of the halo headband, providing a more interactive and immersive virtual reality experience for Oculus users. In fact, the Oculus Rift has now been adapted to utilize Oculus Insight – this allows the Oculus Rift to provide accurate room-scale tracking without any external sensors.

Ultimate Control for your VR Adventures

Oculus Insight TrackingTake a step forwards with Oculus Insight. It translates your movements into VR no matter which way you're facing and provides room-scale tracking without external sensors. Look around, duck for cover and turn the tide of the battle from anywhere in your play space. One of the most convincing arguments regarding the superiority of the Oculus Rift is a simple fact that your Gaming PC is the device’s engine. In fact, it’s recommended that your graphics card has at least 6GB of dedicated video memory, your CPU has at least 4 cores, and you’re running over 8gb of RAM.

Get Unbelievable Gameplay and Gaming Performance

Powerful VR Gaming on PCHarness the full power of your PC. Rift S brings high-performance VR gaming to a wider range of PCs. It delivers stunning graphics and heart-pounding gameplay to desktops and laptops with a quicker, easier setup.

Get the All VR Experience with Integrated Audio

All around audio for full immersive gameplayListen up and all around with integrated audio. Rift S has built-in positional audio so you can hear your teammates or what's sneaking up behind you, even without headphones.

Top VR Gaming LibraryBlast, slash and soar your way through the top library in VR gaming. With so much latent power for the Oculus Rift to utilize, its room for growth and development dwarfs the potential of other VR systems currently available on the market. As a result, the Oculus Rift has exclusive access to some of the best games presently being produced for VR systems.

Is the Oculus Rift Right for Me?

Firstly, we’re not going to beat around the bush or lie to you! As virtual reality, and the Oculus Rift, in particular, are pioneering and relatively new technological breakthroughs, they still carry a relatively steep associated price tag.

Although the price isn’t too excessive by itself, the fact that the Oculus Rift relies on a high-powered Gaming PC to function could push that figure up significantly. Therefore you must take into consideration the recommended requirements of the Oculus Rift, and whether or not your current computer can handle the technology before you decide to go through with the purchase.

If you’re not sure whether your current computer will be able to handle the system-stress of the Oculus Rift, and would like some advice, feel free to call the SCAN team on either 0871-472-4747 or 01204-474747. Alternatively, you can make use of the Live Chat feature available on our website.

Oculus Rift S Virtual Reality Headset & Touch Controllers for Mind-Blowing PC VR Gaming is rated 4.7 out of 5 by 38.
Rated 5 out of 5 by a123456 from Fantastic. I did a lot of research on whether to get a Rift S or an Index - I am very glad I got this. I was worried that the 80Hz and/or hand tracking would make playing FPSs hard, but I haven't noticed either being detrimental. I play Alyx and fast pace sections are smooth and my hands always feel like they're in the right place. I was also worried about the slightly narrower FOV and resolution compared to Index, but neither are visible once playing.
Rated 4 out of 5 by Lemmy70 from Not Mind Blowing But Worth The Upgrade. I bought this as an upgrade to my Oculus Rift CV1 version, if I was honest I was hoping for a giant leap in graphics quality and game immersion but that didn't happen, the graphics are better but not WOW! better... I am surprise they did away with the headphones for built in speakers, those little speakers just don't give you the low frequencies needed to feel the game, but there is a jack so you can wear your own headphones quite comfortably. The sensor tracking is a giant leap forward and quite accurate, this is what sold it to me as a worthwhile upgrade in the end, losing the two USB tracking sensors. All in all a good product for half the price of it's competitors.
Rated 5 out of 5 by Proto420 from This product is quite unbelievable At the time of writing this review, I have had my Rift S for a couple months. The Rift S is amazing, whilst I only have 1 other experience with be, being psvr, I can't recommend this product enough. Sure you have to have it connected via cable at all times unlike the Quest, the Rift S outperforms just by visual quality alone. The tracking being built into the headset is also very handy as I do not have enough room to place trackers.
Rated 4 out of 5 by GambitUK from Best VR Expereince so far Have tried other VR systems and this out ranks them all for easy of set up, versatility and clarity of vision. The only reason for noy giving it 5 stars is the cable, but then thats common to most console/PC based systems. If it went full-wireless, then I'd give it the full 5!
Rated 5 out of 5 by Kelers from Love it I pondered getting this unit for some time before finally commiting as a lot of videos on YouTube and review sites aren't exactly complimentary about it in comparison to the Quest which for me is a different market for people that don't already have a gaming PC as even with the link cable you buy it's not as good as the rift S (in my opinion). They also compare it to the Valve index which costs over £1000 so not exactly fair as of course that is going to be better at that price point. My only gripe is picking the correct USB port, it is very picky about which one it works with so make sure your firmware is up to date on your MoBo. Other than that I love it for the price point ease of use and setup it's second to none. You will not be disappointed.
Rated 5 out of 5 by Mostly80 from Occulus rift s is worth every penny. Great product and great value for a VR headset. Its a complete game changer. I experienced some motion sickness with a few fast moving games but quickly got used to it. I would definitely recommend getting one. The customer service was excellent too, they kept me updated and delivered a lot earlier than expected.
Rated 5 out of 5 by Paddydebs from Great experience Next level of gaming so realistic it’s great fun highly recommend
Rated 3 out of 5 by Q007 from no HDMI support returned this product as it has no HDMI connector, and there is no adapter available to convert displayport to HDMI (adapters are available to convert the other way). This was for use with a laptop that has HDMI but not displayport so had to be returned

Is the rift s definitely coming back in stock on the 28th ?

Is the rift s definitely coming back in stock on the 28th ?
Asked by: SickNoteIRL
Just spoke to scan and they have said they have a backlog of orders of 800+ so even once stock comes in, you will be in a very large queue! i think i'll wait until all this blows over and things get back to normal.
Answered by: Torbz

What does due date even mean?

Seems like you should change it to estimated date as to add to the previous question you were telling people it was due april 28th, but now its change to the 12th of May. So do you have any idea of when its actually comming or do you just plan to keep rolling the date back indefinately. Me personally i put my money down assuming it would come when I was initially told... ?
Asked by: Preordersalwayssuck
&quot;On the product information page, you will find the current ETA. This is the estimated date that our suppliers have given us for stock to arrive at Scan.&quot; - https://www.scan.co.uk/help/products/information/pre-order The date is when Oculus says they'll send more stock
Answered by: Mar2ck
Oculus Rift S VR Gaming Headset System with Touch Controllers