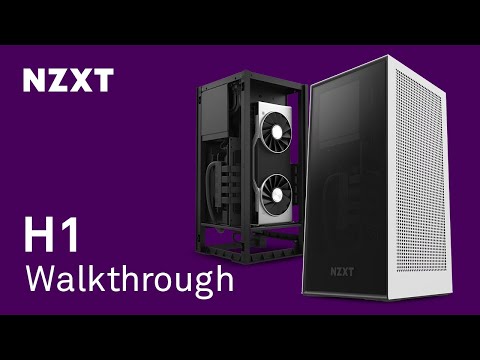 Scan code: LN104506 Manufacturer code: CA-H16WR-W1
Share Facebook Twitter Google Reddit Pinterest LinkedIn
RRP: £299.99
£199.99
Add To Basket
In stock
FREE DELIVERY ON YOUR ENTIRE BASKET
Order now and get it tomorrow, Fri 10th Dec
From £8.34 / month (APR 0%) or 0% for 4 months
If you are approved for a credit limit with PayPal Credit and use it for future purchases, the APR for those purchases won't be more than 21.9% and may be even lower. Great things come in small packagesIntroducing the all new NZXT H1, a new Mini-ITX vertical chassis with huge capabilities. NZXT have streamlined the building process by maintaining full-sized GPU compatibility and integrating a PSU and all-in-one liquid cooler complete with pre-routed cable channels. NZXT have also built a dual-chamber exhaust layout maintaining superior cooling for both the GPU and CPU by providing each with a dedicated air source. Small But mightyThe small compact vertical design gives you a small spatial footprint for your system whilst maintaining support for most full-size GPUs currently available on the market so you can keep your desk real estate without sacrificing graphical power. Pre-routed cables to keep it simpleThe integration of an easy to install, toolless SSD tray and riser card and with the pre-routed cables, the motherboard I/O face down, routing all cables through the bottom of the case for a clean, simplified appearance.

Whats Included in my Case? Integrated PSU, CPU Cooler and Riser Cable By pre-installing key components like the power supply and AIO cooler NZXT have provided users with a better more streamlined building process combine this with the pre-routed cables that make it much easier to manage the clutter and you can see that build times have been vastly decreased. An integrated PCIe Riser Card is also included for vertical GPU mounting.

Optimal Airflow & Cooling for your PC Keep Your system CoolWith a smaller chassis heat management becomes more difficult as there is less space for heat to dissipate however NZXT have implemented a dual-chamber exhaust system which is thermally designed to allow the GPU, CPU and PSU to pull in fresh air and push out hot air without affecting the temperatures of neighboring components.

NZXT H1, White, Mini ITX Chassis w/ Tempered Glass Window, 140mm AIO, USB 3.1 Gen2 Type-C, mITX, 650W 80 PLUS Gold PSU is rated 5.0 out of 5 by 2.
Rated 5 out of 5 by BMChef from Great case, easy build This is a phenominal ITX case. It's perfect for a first time builder. No major cable management to deal with, included AIO and PSU. Great queality, great thermals, great case
Rated 5 out of 5 by David2223 from Great ITX case, high demand for a reason Super happy with the case, virtually silent, great finish, superb cable routing capabilities. Fits the largest graphic cards you can find as lon as they are 2 or 2.5 bays. Would 100% recommend.

What is the AIO and how does it work? I.e how much water do you put in?

Asked by: Tom2199
It's a small loop with water in it already. Yo don't have to do anything with it, just mount to your CPU. Easy as that. It is also great for cooling. I just biult in this case. It's brilliant!
Answered by: BMChef

Looking to build on either the Gigabyte Aorus or the Asus ROG Strix mini itx board. will the PSU and AIO be good enough to handle it, and are there enough power connectors for a 2080 super (and is it big enough to take that card?
Asked by: Anonymous
Please contact our Sales team before ordering, and we can suggest a suitable card based on your requirements.
Answered by: DavidScan

hi guys, looking to pre order this but the release date keeps changing, any idea of its actual UK release?also if i pre order and its delayed can i ca

Asked by: simmo91x
The release date is changing due to Covid-19, I have bought the case and it seems the release date is now the 15th of June, however stock seems to be unavailable due to the high number of preorders.
Answered by: Ebbe
NZXT White H1 Mini-ITX Windowed PC Gaming Case with 650W PSU & AIO Fitted