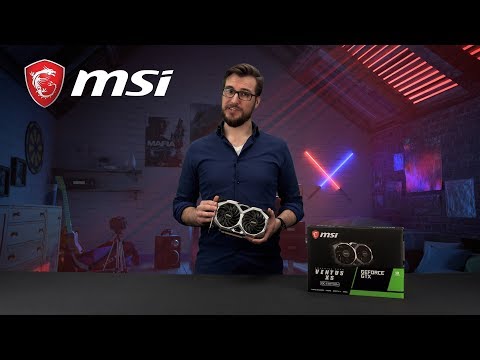 Scan code: LN97731 Manufacturer code: GTX 1650 VENTUS XS 4G OC
Share Facebook Twitter Google Reddit Pinterest LinkedIn
Order now and get it tomorrow, Wed 6th Jul
£182.99
Add To Basket
Get it Tomorrow, 06 JulIn stock
From £15.73 / month (APR 5.9%) or 0% for 4 months
If you are approved for a credit limit with PayPal Credit and use it for future purchases, the APR for those purchases won't be more than 21.9% and may be even lower.

Brand New GTX Card With Turing ArchitectureDriven by the all-new NVIDIA Turing architecture has been incorporated into the MSI GeForce GTX 16-Series Graphics Cards, the GeForce GTX 1650 VENTUS XS OC produces a Boost Clock of 1740 MHz giving you incredible new levels of gaming power with realistic visuals and high framerates. Utilizing Dual Fan Thermal Design into the GTX 1650 card you can gain an extra level of gaming performance for you to enjoy, Dual Fans coves more area of the heatsink to take heat away more efficiently.

Efficiently Cool Your GPU MSI have designed the VENTUS XS OC to house a Dual fan setup, these fans are deisgned efficiently move heat through the card's heatsink and be dispersed away from the GPU. OC Cards are equipped with higher clock speeds for increased performance so keeping an eye on the cooling and temperatures of your card are vital for performance and durability.

Up to 6 times faster performance from last Gen Built with the latest Turing Architecture from NVIDIA, which you normally see in the RTX 20-Series cards. Turing is manufactured and utilizes a 12nm chip whilst bringing a large amount of GPU processing power to your games.