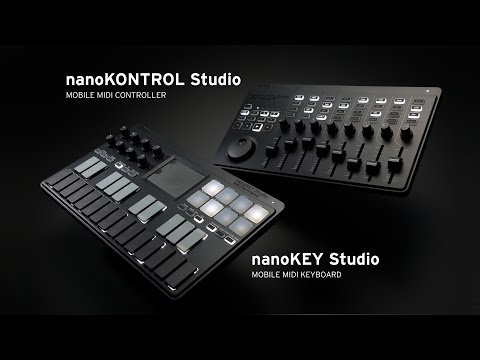 Scan code: LN69546 Manufacturer code: NANOKTRL-ST
Share Facebook Twitter Google Reddit Pinterest LinkedIn
£110.00Item currently awaiting an ETA
Pre Order
Pre order
FREE DELIVERY ON YOUR ENTIRE BASKET
From £9.88 / month (APR 14.9%)
If you are approved for a credit limit with PayPal Credit and use it for future purchases, the APR for those purchases won't be more than 19.9% and may be even lower.

Subject to status. Terms and Conditions apply.
spend over £225 and Buy Now, Pay Later or spread the cost of your finance over 24-48 months with a 10% deposit.
Delivery Options Services
Share Facebook Twitter Google Reddit Pinterest LinkedIn WhatsApp
Product Overview The perfect size for intuitively controlling your music.
A physical MIDI controller that you can use via USB or MIDI. The nanoKONTROL Studio provides transport keys and a mixer section, giving you stress-free control of your DAW or DJ software. It is battery operated and can connect wirelessly with your iPhone/iPad or Mac/Windows. It’s a light-weight, compact mobile MIDI controller that lets you create music more intuitively than ever.

A compact physical MIDI controller that’s ideal for mobile or desktop uses.
Smaller than a letter-sized sheet of paper, the nanoKONTROL Studio is designed for thinness. It’s the perfect size to easily carry in a bag and use with your computer. In spite of its compact size, its controllers provide generous power and a solid feel, making it a convenient and versatile MIDI controller.

USB and wireless for more music production freedom.
The nanoKONTROL Studio can connect not only via USB but also wirelessly. It can easily connect to iPad/iPhone music apps such as KORG Gadget and Apple GarageBand, or to your Mac/Windows music production software. Freed from annoying cables, you can set up your equipment easily and efficiently. Due to careful tuning, you can enjoy low latency and high stability.

Refined and stylish design
The simple, refined, and stylish design features illumination with beautiful white LEDs. The design has been modernized to use alongside new devices such as your laptop, tablet, or smartphone.

A full array of controllers that cover everything from DAW control to DJ performance.
You have the all controllers you need to operate your DAW: sliders that feature generous spacing and stroke, plus a convenient jog wheel. Whether you’re controlling your DAW and plug-ins, or putting on a performance, the nanoKONTROL Studio provides everything you need in any situation.

A lavish bundle of powerful music software is included free of charge.
The nanoKONTROL Studio comes with the incredible “KORG Software Bundle” that lets you start enjoying popular music software right away. Whether you’re on mobile or laptop, you can start creating music as soon as you purchase this unit.
The sounds and functionality of “iPad / iPhone apps” can be expanded by connecting them to a nano Studio series unit.

Click here for details and downloads of the KORG Software Bundle.

iOS:
iPad/iPhone that Supports Bluetooth 4.0, and has iOS8 or later installed.

Mac:
Mac that supports Bluetooth 4.0 or later, and has OS X10.10 Yosemite or later installed.