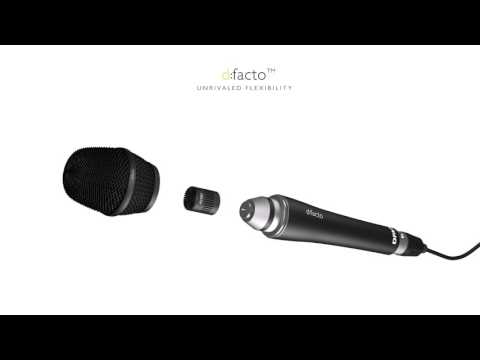 Scan code: LN92075 Manufacturer code: 4018V-B-SE2
Share Facebook Twitter Google Reddit Pinterest LinkedIn
£888.00
Add To Basket
In stock
Free Delivery
From £42.63 / month (APR 14.9%)
If you are approved for a credit limit with PayPal Credit and use it for future purchases, the APR for those purchases won't be more than 19.9% and may be even lower.

True studio sound on the live stage
The d:facto™ series brings true studio sound to the live stage and broadcasting studio. These mics are available in an extremely linear version as well as in a version with a high-end boost. The modular nature of the d:facto™ series allows you to switch the capsule as well as the adapter, making it the most flexible vocal microphone available on the market.

Engineered especially for vocal performances onstage, the d:facto™ holds a supercardioid capsule that is designed to reproduce every nuance of the human voice transparently, consistently and thrillingly. There are two versions available. The d:facto™ Linear Vocal Microphone (4018VL) is extremely linear. The d:facto™ Vocal Microphone (4018V) is linear but with a high-end boost. The 4018V is often chosen because it ‘cuts through’ on a broadcasting set, where the content typically ends up transmitted to built-in television speakers with limited audio quality.

Besides the linearity / boost, these mics are identical. Both feature an isolation-optimized supercardioid polar pattern. This directional characteristic offers the best of two worlds – from cardioid and supercardioid patterns. These mics can handle loud vocals with three-step pop-protection grid and best-in-class low handling noise. They also offer excellent sonic reproduction with all the detail and balanced linear phase and frequency response users have grown to trust for DPA Microphones.

Modularity redefined
The d:facto™ Handheld Microphones series boasts a fully modular construction. The grid, capsules and wired handle (or adapters for wireless systems) are all interchangeable. This ensures that your audio investment is future proof — easily adaptable to changes in wireless technology as well as frequency-band modifications.

You can use the same supreme-sounding capsules wired as well as with third-party wireless mic handles. This preserves the capsule sound and makes it possible to keep the sound settings between different performances. Improving the sound quality even with low-cost wireless systems may be a better audio result than buying a more expensive wireless system.

Pop protection and shock mounting
It can be quite a challenge to give a stage mic enough protection against plosive consonants like k, p and f without adding too much high-frequency damping at the same time.

We have developed a three-way pop-protection system, which is easy to remove, split and clean after use. d:facto™ Vocal Microphones also have an effective built-in shock rejection rubber ring close to the mic head, which suppresses unwanted handling noise.

With the d:facto™ Vocal Microphones series, you are no longer bound to one wireless system. As circumstances change, you can just switch your adapter at a quarter of the cost of a new microphone. You won't hear any loss in sound quality.

d:facto™ adapters work with all leading wireless mic solutions, such as Lectrosonics, Sennheiser, Shure, Sony and Wisycom. DPA Microphones’ ingenious adapter system is one of a kind in the industry. This modular system protects your investment in fantastic sound for years to come.

Optimized for live performance
d:facto™ Vocal Microphones are the ultimate stage mics – no matter if the performance is taking place in a cozy club or the largest concert hall.

Like traditional supercardioid mics, the d:facto™ series enjoys high side- and rear rejection with a minimum of 9 dB attenuation to the sides. Yet it is not bound by the less desirable aspects of the supercardioid like the uncontrolled and nonlinear rear lobes, which can create feedback from stage wedges, because there is a sudden high frequency peak at the backside of the mic.

The d:facto™ series has a wider acceptance angle at the front of the mic than most supercardioids. The acceptance angle is identical to a first-order cardioid at ±60 degrees off-center, resulting in the same work field as a cardioid — just with extremely high and uniform side and rear damping.

Linear or with a high-end boost?
When you choose your d:facto™ Vocal Microphone, you get to choose the microphone that best meets your need. An extremely linear version of the d:facto™ Vocal Microphone is engineered specifically for audio engineers who prefer setting their own unique impression on the final sound. A version with a pre-programmed high-end boost has a 3 dB soft boost at 12 kHz.

Both versions of the d:facto™ are designed to capture electrifying live performances and accurately replicate a singer's voice transparently, consistently and thrillingly. These mics are optimized for use in sound reinforcement as well as recording applications. They offer natural sound, high separation from nearby sound sources and SPL handling up to 160 dB.

A bit about supercardioids
A supercardioid microphone is similar to a cardioid – it is most sensitive to sound coming in at the front and is least sensitive at the back. Supercardioid mics tend to have a much narrower angle of sensitivity – making them even more focused than a “normal” cardioid mic. This off-axis sound will be more or less colored and damped – and, due to the narrow angle of focus, the area of damped sound is increased significantly. The unique DPA capsule technique however skips the colorization of the sound coming from the sides or the rear of the mic and just reduces the sensitivity to these angles and thereby offers perfect sound stages. The amount of damping depends on the exact specifications of the mic.

Due to their nature, supercardioid mics are often used on the live stage – both during concerts as well as spoken-word events, to capture the focused sound of an instrument or voice. The narrow angle of sensitivity helps to minimize the bleed from other sounds on a busy stage. One thing to note with supercardioid mics is the proximity effect, which causes an increase in bass response the closer the microphone is moved to the sound source. Also, supercardioid mics are far more sensitive to wind, pop and handling noises than omni mics, so be sure to take precautions to guard against this.

Wired or wireless? - you choose
You can use the d:facto™ Vocal Microphone with a sleek, state-of-the-art d:facto™ Handle for a wired solution or choose to use a d:facto™ Capsule together with your favorite wireless system. If you decide to go wireless, you can just switch to an adapter for wireless at a quarter of the cost of a new microphone. As circumstances change, you can just switch your adapter, instead of incurring the cost of a completely new microphone. When you make the switch, you won't hear any loss or change in sound quality.