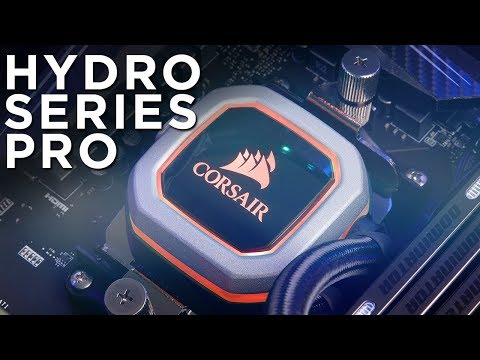 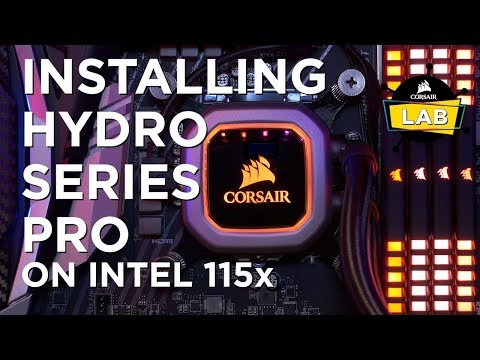 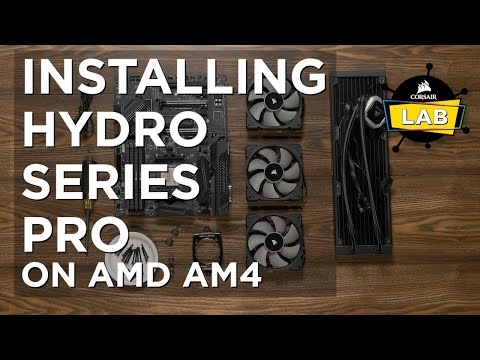 Corsair Hydro Series H150i PRO RGB, 360mm All-In-One Hydro CPU Cooler, 3x 120mm ML Series Fans, RGB Pump Head, Intel/AMD is rated 5.0 out of 5 by 11.
Rated 5 out of 5 by kingy10005 from Excellent cooler easy to install Very amazing cooler keeps my CPU below 60 c on low fan curve and looks great
Rated 5 out of 5 by Joote from Best AIO. I have tried a few Liquid AIO systems, but have returned to Corsair, they simply make the best AIO's liquid cooling systems. Along with their excellent software they make computer life so easy. I bought this to cool my new i9 and it does the job perfectly. Quiet and efficiently. Their new ML fans are whisper quiet.
Rated 5 out of 5 by silverhazey from Is this thing even on? Whisper quiet - even on perfomance mode it's barely audible. Build quality is fantastic and works really well at keeping cpu cool
Rated 5 out of 5 by l3lol3l3y from Great quality AIO Done a great job of cooling my 6700k to 4.8Ghz idles at 21*c max load temp peaks about 56*c fans have great airflow considering how quiet they are for 100% and the pump at 2700RPM Max is pretty quiet too great quality build and very easy to install. Just to note I did buy an xtra 3 fans to do push pull config but will say only made it a couple of *c cooler but if your gonna do it get all the performance your can get eh!? ;-)
Rated 5 out of 5 by Dancheff from Fantastic AIO Love it. Cooler looks stylish and have synced the rgb with my other Corsair link products. Included fans are of great quality and fits nicely into my 75R
Rated 5 out of 5 by vMax23 from Impressive performance and very quiet... I have an i7-8700K and wanted to overclock so I decided a good cooling solution would be required. The H150i Pro was at a great price, though not cheap and I decided to go for it. Installation was simple due to Corsair's tried and trusted method, something I have used in the past with H100i, so absolutly no issues. So after cranking the 8700K upto 5 GHz, I was super impressed with the cooling perormance. In Prime95 version 26.6, I maxed out at 72 degrees and this is at 5 GHz and 1.328v. The software I used with it was Corsiar Utlility Engine (CUE) and it works perfectly synching my Corsair Rapid Fire Keyboard and My Corsair Void headphones to the RGB function and with my Motherboards RGB function in the Gigabyte Z370 Gaming 7. Controlling the pump speed via CUE worked as well and I have it running in balanced mode.Overall it does a fantastic job, very impressed in deed.
Rated 5 out of 5 by Jdon01 from Amazing RGB AIO Water Cooler Amazing AIO water cooler for your PC setup. I’m personally a big fan of Corsair and love all there RGB product and this is a great cooler for my i7 8700k. Good for a decent overclock if your looking to do so. I’m a bit disappointed it did not come with RGB fans but I bought my own (3 x Corsair LL 120mm) so no problem. I’d say the only issue I have with it is that it’s really big. I could just fit it in my case, but other than that I’d say this is anouther amazing product form Corsair and I’m happy with it.
Rated 5 out of 5 by Mikeyuk165 from Excellent Aio Cooler Corsair does it again with this aio cooler, u can tell the quality when you get it out the box it has a thick radiator with good fin setup and great fans for great Airflow and excellent pump to keep your cpu nice and cool with RGB thrown in for those that like rgb temps with this cooler are much lower and more stable if you don't like the idea of custom loops I recommend you get this aio as it is one of the best at the minute.

will this work with 1151 socket

Asked by: Ferdia8
Yes. I have it fitted to my i9-S1151. Really easy to install, no complicated parts. It's all very straight forward.
Answered by: Joote

Can both pump and fan be set to quiet, balanced and extreme.

If I replace the fans with 3 pin DC fans, will everything still work properly?

I already have Corsair AF120 fans, seems a shame to not use them, so would they work as a replacement to the stock fans even though they are 3 pin DC not 4 pin PWM? Thank you.
Asked by: DavidK4816
First off, why would you want to change them? The fans that come with this are the Corsair ML120mm (magnetic levitation). Really quiet and great airflow. If you really did want to change them, then they need to connect to the 3-way connector (3 fans into 1 cable) that then connects to cpu_fan connectot on m/board
Answered by: silverhazey

Will the H150i fit inside Corsair Obsidian 450D case?

Asus Maximus Code X 8700K
Asked by: 877cms
Hello, The Corsair Obsidian 450D has a mounting location for a 360mm radiator in the top of the case. Regards,
Answered by: JackB

Does this cooler come with an AM4 bracket to support an AMD 3950x ?

Does this cooler come with an AM4 bracket to support an AMD 3950x ? If not, can you advise what extra bracket would be required ?
Asked by: MattY1919
Good Morning, From what I can see, this cooler should work fine with the AM4 Socket. https://www.corsair.com/uk/en/Categories/Products/Liquid-Cooling/Hydro-Series%E2%84%A2-H150i-PRO-RGB-360mm-Liquid-CPU-Cooler/p/CW-9060031-WW#tab-package-contents Kind Regards,
Answered by: LukeW
Corsair H150i PRO 360mm RGB AIO Intel/AMD CPU Water Cooler