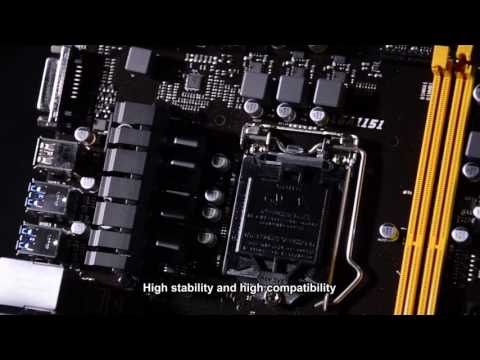 Saving up to US$200 in Your Pocket

The cost of a mining system is always such a thing that a miner cares about the most. Now BIOSTAR TB250-BTC PRO saves all professional miners' money efficiently and wisely! You can build up one crypto mining system with TB250-BTC PRO, loaded up to 12 GPUs to earn even much more profit than that of two systems with the setup of TB250-BTC and 6 GPUs respectively. That is, you may probably save a system cost around up to US$200 on the mining hardware and components. For example, the cost saving includes a CPU, a motherboard, a SSD, a memory card, and other PC peripherals. We do bring the best cost saving solution to all professional mining enthusiasts!

Compared to two mining machines with TB250-BTC, one ultimate mining machine with TB250-BTC PRO efficiently boosts the mining performance up to 200% to maximise your profitability and makes you spend much less time getting the highest mining return. TB250-BTC PRO brings 2X faster mining speed to increase much higher hashrate and makes the mining performance most efficient; that is, you can get the best cost of return just in 79 days, which is compared to 97 days for the two sets of TB250-BTC mining machines. We do bring the most bang for a miner's buck and time is money. The more time you save; the more money you get!

BIOSTAR exclusively designs the awesome and neat layout of PCI-e slots, evenly equipped on the motherboard to prevent short circuit while mining. There is no more short-circuit issue to bother a professional miner for non-stop mining money stably.

12 PCI-e slots of TB250-BTC PRO are thoroughly native PCI-e from the latest Intel B250 chipset. This feature is amazingly superior to some of the mining motherboards with PCI-e bridge solution to expand more slots for their so-called mining motherboards yet miners will get some incompatibility and low stability problems from that kind of mining mainboards. To top it off, BIOSTAR TB250-BTC PRO is equipped with the latest Intel B250 chipset yet others on the market are Intel H110 chipset. BIOSTAR proudly brings such excellent mining user experience to mining enthusiasts. Why are native PCI-e slots so vital to GPU mining? Native PCI-e slots can make the GPUs operating with high stability, high compatibility, and high speed of PCI-e bandwidth. That's why we are so proud to be the first one to launch such kind of dedicated and powerful crypto mining motherboard TB250-BTC PRO onto the crypto mining market. We make a very robust mining base for every miner.

BIOSTAR TB250-BTC PRO uses Intel B250 chipset supporting native PCI-e up to 12 slots. Every slot has a dedicated channel itself that makes mining more smoothly.

Other crypto mining motherboards use Intel H110 chipset only supporting 6 native PCI-e slots, and the other extra PCI-e slots are supported by PCI-e x1 extension chip, which makes the bandwidth limited and comes with much more mining performance problems just like low stability, low compatibility, low speed of bandwidth, and so on.

There is no more stock problem out there for those professional miners who are desperately looking for the hot-selling and high price performance crypto mining graphics card AMD RX 470. BIOSTAR TB250-BTC PRO compatibly supports the hybrid graphics card platform and now you can easily take the hybrid GPU setup, like 6 pieces of AMD RX 470 and 6 pieces of NVIDIA GTX 1060. Others are still waiting for the stock, yet you are mining to earn tons of money day and night. Time is all about money, money, and still money to an ultimate miner!

DVI is better than VGA for LCD displays since it is digital while VGA is analog. For LCD displays, the picture is digitized pixel per pixel. Through DVI, the panel gets data for each pixel, so the picture generated in the Graphics device matches the pixels on the panel itself.

DirectX 12 introduces the next version of Direct3D, the graphics API at the heart of DirectX. Direct3D is one of the most critical pieces of a game or game engine, and we've redesigned it to be faster and more efficient than ever before. Direct3D 12 enables richer scenes, more objects, and full utilisation of modern GPU hardware.

The popularity of PC usage and working environment is getting deteriorating and moist(rural, coastal, etc.). The PCB will be oxidising easily by damp or absorbed moisture, and ionic migration or CAF (Conductive Anodic Filament) will be generated. Moisture-proof PCB meets high density and high reliability requirements for moisture proof.

BIOSTAR exclusive Anti-Surge design provides the best protection of board and extends the product life. Having the latest model of "Transient Voltage Suppressor" on- board can effectively protect the board circuit, reducing the shocks caused by ESD as well as other damages arising from overvoltage transients to enhance system durability.

ESD (Electrostatic Discharge) is the major factor to destroy PC by electrical overstress(EOS) condition, ESD occurred by PC users when touch any devices connect to PC, which may result in damage to motherboard or parts. ESD protection is designed to protect the motherboard and equipment from damage by EOS.

All BIOSTAR special circuit design detects overvoltage conditions and prevents voltage surges from spreading in real time. It also actively cuts off the overvoltage supply to protect your system. Over current protection, avoid motherboard from damage when doing overclock or an unusual current import. Over heat protection, avoid motherboard & CPU from burning when exceeding the temperature limitation.

Users can easily assemble their own computer, a simple-swap data discs and other accessories.

BIOSTAR offers a perfect choice for "Bitcoin Mining" with more PCI-E slots for users who wish to create a dedicated mining machine and getting a value oriented motherboard that can load up graphic cards is the ideal strategy.

Important - Please Note: This Motherboard is Intended for Cryptocurrency Mining.

Reviews
Biostar TB250-BTC Pro, Mining Intel B250, S 1151, DDR4, PCIe 3.0 x16 + 11x PCIe x1, SATA3, Realtek GbE, USB 3.0, ATX is rated 1.0 out of 5 by 2.
Rated 1 out of 5 by Adamr84 from Defective board PCIEx16 slot not functional, had to return the board. Scan service was excellent and refunded quickly.
Rated 1 out of 5 by Technogltd from MINERS STAY AWAY We build mining rigs before and also repair computers for work! After building a 8 rig windows system 5 out of 8 cards showing 30mhs, 2 showing 27 mhs and 1 showing 20mhs. After intense investigation changing things around and replacing with new our conclusion is that this board is bad build quality. Please understand that it is not scan who have let us down, its is the biostar product that we have had an issue with. Scan has always been good to us.
Questions & Answers
Biostar Intel B250 TB250 BTC Pro Cryptocoin Mining ATX Motherboard