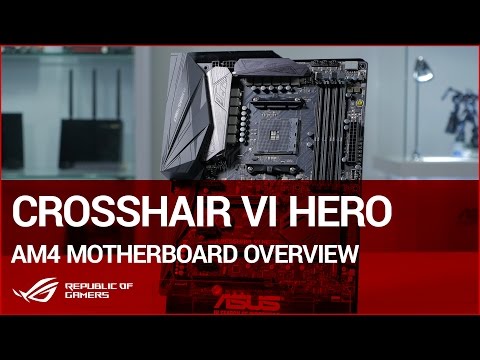 CROSSHAIR VI HERO from ASUS built for gamers and enthusiasts

ROG motherboards are built and designed to thrill the best gamers and top PC enthusiasts. The ROG Crosshair VI HERO Series running on AMD Ryzen are the next stage along that road. The board is made to strike a balance between gaming and enthusiast needs, granting incredible performance, easy-to-use interfaces, Aura-Sync lighting and even customizing options through 3D-printed parts to add to the board. Crosshair VI is filled with the latest advancing technologies that help all aspects of your PC system from cooling to performance, audio to graphic output and even giving you a helping hand in competitive gaming. The special mounting holes on the CROSSHAIR VI HERO makes it easy to fit with AM3/AM4 coolers as well as the existing LN2 pots. Just switch out the AM3 cooler for a AM4 one, you’ll get more life out of your previous cooler! Aura features two independently-controlled onboard headers ready to sync lighting effects with different Aura Sync compatible products. The latest version of the ROG AURA software brings the expression “Light up your build” to a whole new level. The device control panel allows for the simple syncing/desyncing of Aura capable devices, the updated LED visualization has a total of 9 different custom effects that fully utilize the more complex lighting control schema on the latest boards and the fine-tuning area allows for the most minute control of each individual lighting area!

ROG's awesome SupremeFX audio technology has levelled up, delivering an exceptional 113dB signal-to-noise ratio on the line-in connection and 120dB on line-out — and that means our best-ever recording quality! We've also added a low-dropout regulator for cleaner power delivery to the SupremeFX S1220 codec, an ESS® Sabre Hi-Fi ES9023P digital-to-analog converter for superior front-panel output, and a Texas Instruments® RC4850 op-amp for high gain with low distortion — which all adds up to audio that envelops you as never before.

Gaming Domination through Scan and detect

Sonic Radar III is all-new – with an evolved audio engine that processes sounds more accurately than ever, ensuring you're always aware of what's going on around you. A new on-screen arrow has also been added to help you pinpoint the enemy position instantly! A dedicated base-clock generator designed for AM4 processors. This custom solution works in tandem with the ASUS TurboV Processing Unit (TPU) to enhance voltage and base-clock overclocking control — providing an exciting new way to boost performance to extreme heights. Reduce boot time, Lower jitter under extreme conditions for higher overclocks and increased stability under heavy overclocking all with Pro Clock. USB-C is the future-proof reversible connector — and ROG Crosshair VI Hero let you put the connection right where it’s needed! With an onboard USB 3.1 front panel connector you can position a USB-C port on your system’s front panel, so it’s always within reach.

Image for display only GPU Source Mapping: With high-end GPUs being the largest source of heat in any build, the GPU more of an effect on nominal case temperatures than any other component. At long last, users can set GPU temperature as a fan tuning source via Fan Xpert 4 for a dynamic cooling response to system power output!

Watercooling Zone: With the new watercooling zone, temperatures and flow rates can be read directly into DIP5—allowing peace of mind to know that everything is functioning properly, while saving the hassle of installing third party hardware.

It is designed specifically for users that need finer control of their custom watercooling setups: Only Republic Of Gamers motherboards

The Hero utilizes an all new patented heatsink design, produced via a specialized extrusion process. The perforations created through this process work in tandem with the onboard LEDs to create unique aura around the PCH logo. Personalize and customize your X370

ASUS is the first motherboard manufacturer to support 3D printing, making it easy to customise your motherboard's appearance and improve system performance with a range of printable parts. Dedicated 3D Mounts on the motherboard makes fitting 3D-printed parts easy. Using the same screws as M.2 drives and standard motherboard mounting holes, you can easily add nameplates, cable covers, or an M.2 fan holder.

*Products with the 3D Printing Friendly logo feature the specialised 3D Mount and are also bundled with an extra 3D Mount kit. 3D printing friendly. Make it your own. ASUS Get you gaming Faster than ever

ROG's uniquely intelligent technology effectively caches an entire storage device so that favourite games and apps launch at breakneck speeds: going to work the moment it's activated. RAMCache II turns milliseconds into microseconds to boost game-load times to stratospheric levels!
Automatically caches all your storage devices at the same time for optimal use of your system‘s caching resources. TEAM UP TO BANISH GAMING LAG