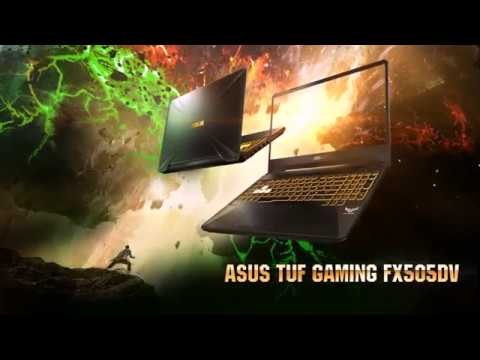 Scan code: LN100313 Manufacturer code: FX505DV-AL014T
Share Facebook Twitter Google Reddit Pinterest LinkedIn
£1,199.99
Add To Basket
In stock
FREE DELIVERY ON THIS ITEM
Order now and get it tomorrow, Mon 13th Jul
From £57.60 / month (APR 14.9%)
If you are approved for a credit limit with PayPal Credit and use it for future purchases, the APR for those purchases won't be more than 19.9% and may be even lower. A Tough & Powerful Piece of GTX GamingThe ASUS TUF Gaming FX505 Quad-Core Ryzen 7 powered laptop is unrivalled and designed for gamers and engineered for intense gaming, which provides an extended lifespan that goes above and beyond. The FX505 features a keyboard inspired by desktop keyboards and includes yellow LED backlit keys, highlighted WASD key group and Overstroke technology for ultra-fast precise control. Featuring Anti-Dust tunnels which expel dirt and dust from the chassis to preserve performance and longevity. Along with a stunning 15’’ Full HD display and immersive DTS Surround Sound, your gameplay will be impeccable. ASUS TUF laptops are solidly built for excellent durability, and equipped with Ryzen Processors and NVIDIA GPU's to play the latest games and multitask with ease wherever you are, for years to come. EXTREME IMMERSION ON AN ULTRA-FAST DISPLAY With a 7.18mm bezel the NanoEdge design brings extreme immersion in a compact laptop. The FX505 features an IPS-Level panel with a fast refresh rate for super smooth gameplay. Another feature is the 100% colour gamut giving you vivid and consistent colours, its superior wide-view angles allow you to see more from extreme positions. New Ryzen 7 ProcessorThe FX505 provides a full gaming desktop experience despite its compact form factor. It’s suited with an powerful new Ryzen 7-3750H processor featuring a turbo speed of up to 4.0GHz and NVIDIA GeForce RTX 2060 graphics, both work together to bring you a more powerful, rich, faster experience for multiple tasks such as gaming, recording and live-streaming. Fast Gaming and Multitasking Get ready for some serious multitasking, TUF Gaming FX505 pairs its Ryzen processor with 16GB of dual-channel DDR4 2666MHz memory for improved performance and energy efficiency. Included in the FX505 is a superfast 512GB SSD Storage option that is coupled with a large storage capacity hard drive that is 1TB. Get incredibly quick loading screens and a large storage option to store all your games and media. HYPERCOOL TECHNOLOGY IMPROVES DURABILITY You can be sure that your FX505 keeps cool with the ASUS-exclusive Hypercool Technology which incorporates an Anti-Dust Cooling system, mixing that with the Fan Overboost technology you can expect to see exceptional cooling. And with the patented trapezoid-cut lid and intelligent parallel fan placement for even more cooling you know that your laptop will perform at its best.

7.1 HIGH-FIDELITY AUDIO Experience high-fidelity 7.1 virtual surround sound, this is thanks to the DTS Headphone: X technology as it optimizes and delivers immersive games, sports, and movies and allows for additional fine-tuning with its built in-equalizer.

pushed to the limit The FX505 passes a series of rigorous MIL-STD-810G tests, it has survived extreme conditions from solar radiation exposure, high altitude, and various temperatures. Durable and stable the FX505 has been pushed to the limit for gamers so that it is certified to endure day-to-day use which could include accidental knocks and sudden drops on the desk. FASTER SPEEDS, WIDER COVERAGE With the latest 802.11ac Intel Wi-Fi Card the FX505 boasts data transfer rates of up to an incredible 1.7Gbps, 12X faster than the baseline standard. Additionally, you can gain a 30% wider coverage with the 2x2 MIMO configuration, this alongside the superfast speeds allow you to stream your favourite movies in high-resolution or play online with fewer connection drops, even if the FX505 is far away from your router.

Precise keystrokes with HyperStrike Technology Optimized for gaming, the Desktop Inspired Keyboard with yellow backlit LEDs has exclusive HyperStrike technology that ensures more accurate typing and improved ergonomics. It includes a highlighted WASD key group, broader space bar, isolated arrow keys, and recognizable gaps between the function keys. Working with that the Overstroke technology registers keystrokes faster and more precise so that you are always in control.

Connectivity within reach The FX505 features a host of I/O Ports including a single USB 2.0 and two USB 3.2 ports for your gaming peripherals, as well as HDMI 2.0 to connect to an external display. All ports are situated on the left side of the laptop so there’s nothing to interfere with right handed gaming.

Reviews
15.6" ASUS TUF Gaming FX505DV-AL014T, FHD, IPS, 120Hz, Ryzen 7 3750H, 16GB DDR4, 512GB NVMe, 6GB RTX 2060, Win10 Home is rated 4.5 out of 5 by 2.
Rated 5 out of 5 by Wessie from Great computer This laptop is great, very quick and lives up well to gaming so far. Fantastic service from Scan UK. Very professional company to deal with.
Rated 4 out of 5 by m2019 from Great bang for buck, and a dependable laptop. This product has helped me immensely with game development and with playing games, especially with its built-in RTX 2060 that allows me to run games at their highest settings. One of my only complaints is the keyboard, which is usable, but this is coming from someone who's used a mechanical keyboard for at least a year or two. It also tends to switch on the numpad automatically on another operating system I have installed on this. There's also no numpad indicator though in the first place, which is a bit inconvenient. If anything else, I feel like certain keys are placed too close together, which can give me some erroneous inputs if I'm not too careful (like the up arrow key, near the End and Insert keys, and the tilde/hash key placed next to the Enter key that doesn't bear a unique shape compared to other UK keyboards I've used). I/O is lacking, but if you're someone who can supply their own (powered) USB ports, this shouldn't be an issue. It's great they're all placed on one side too. The CPU is a bit sluggish compared to a desktop (I get similar performance to my Ryzen 5 2600 powered desktop), but this should be expected from a laptop. Temperatures when gaming on this laptop can get quite hot, but this is to be expected. Fans can get loud especially when using the Turbo mode. Storage is a bit lacking especially if you're dual-booting and/or just happen to have a lot of software installed on this computer. Fortunately, it can be upgraded with one spare NVMe slot or two USB 3.1 ports. Trackpad can sometimes lag a bit, so a mouse is heavily recommended on this machine - then again, it's a gaming laptop, so this should possibly be assumed in the first place. The BIOS is rather basic on features, so more advanced users can't really change much. I've used cheaper and/or older laptops that have more configuration options in their BIOS. The display can be a bit of a fingerprint magnet, so I suggest one should get some wipes or cloth if they can. It's also fairly dependable in a variety of conditions, but can sometimes be a bit annoying to use in bright conditions. My only major concern is how I'm going to replace the power brick, since I have not been able to find the same power brick elsewhere online at the moment. This is a part of the laptop one should really be careful with. Complaints and issues aside, this laptop is a good workhorse for any gaming and other CPU/GPU intensive work. Carrying this thing around, although a little bit bulky, is manageable with one of the existing laptop bags I have, that probably isn't designed to carry around gaming laptops.
Questions & Answers

How to safely disconnect and reconnect the battety

How do I safely disconnect and reconnect the battery on this, safely, during upgrades? As the website for this laptop doesn't tell me that. Thanks, T.N.T.
Asked by: Nathan33
Good Morning, There should be two tabs/buttons located near that battery that will allow you to remove the battery. Alternatively, I would recommend contacting the manufacturer directly regarding this. Kind Regards,
Answered by: LukeW
ASUS TUF FX505DV 15" 120Hz Full HD Ryzen 7 RTX 2060 Gaming Laptop