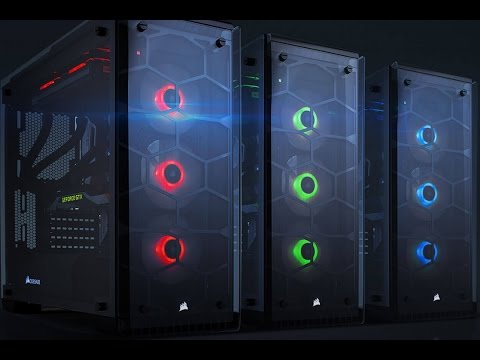 Scan code: LN75991 Manufacturer code: CC-9011098-WW
review
Share Facebook Twitter Google Reddit Pinterest LinkedIn
Order in the next 3 mins and get it tomorrow (upgrade to Sunday delivery at checkout)
RRP: £209.99
£169.99
Add To Basket
Get it Tomorrow, 22 MayIn stock
FREE DELIVERY ON THIS ITEM
From £14.61 / month (APR 5.9%) or 0% for 4 months
If you are approved for a credit limit with PayPal Credit and use it for future purchases, the APR for those purchases won't be more than 21.9% and may be even lower. The 570X RGB is a compact and expandable two-panel tempered glass case, that allows you to view all of your components. The front glass panel hosts three SP120 RGB fans that you can customize to your heart’s content. These fans give you ample cooling directly to your components without the annoying fan hum. The Crystal 570X from Corsair also features Direct Airflow Technology that keeps everything cool and quite for the best PC experience. Corsair have engineered the Crystal 570X to pack all the performance and expandability you need into a beautifully modern and compact case design. Put your build on display through beautiful two-panel tempered glass and keep it all running cool and quiet with Direct Airflow technology. One way to reduce noise is to make sure your fans don’t work harder than they have to. By removing the drive cages behind the intake fans, we provide a more efficient direct airflow path to your hottest components, the CPU and GPU. It’s just a smarter design. Great airflow doesn’t have to be noisy - with three SP120 RGB LED that accent the 570X with brilliant RGB lighting in an amazing array of colours, these fans can also push good amounts of air across your hottest devices without that annoying fan hum, and the direct airflow design of the 570X provides an excellent path for cold air to get to your hottest parts. Clean up the inside of your case by tucking all those cables and less-attractive drives behind two modular, clean, and refined PSU and 3.5” bay covers. Or remove them for assembly – it’s up to you.

The 570X RGB has room at the front, top, and rear for radiators, allowing you to quiet down your GPU and CPU with liquid coolers, this also allows you to get better overclocks out of your components for better quality gaming.

Corsair Crystal Series 570X RGB Mid Tower Computer Chassis, ATX/mATX/mITX, Tempered Glass, 3x120mm RGB Fan is rated 4.5 out of 5 by 6.
Rated 4 out of 5 by Scotsy from A few flaws but beautiful case I bought this case for my latest build about 2 years ago, so it's had plenty of use and abuse since then. I have 2 major issues with the case: 1. PSU shroud - the smaller 460x and 460c versions of this case have a full PSU shroud to hide all those messy cables, the bigger, more expensive 570x does not - what gives? the bottom of my case looks like a plate of spaghetti. Along with this, there's no space between the end of an ATX mobo and the shroud, so I/O inputs are left to sit along the top of the shroud and it looks untidy. 2. There's a cable management cover on the back side to hide away larger cables such as mobo power, SATA, etc and it's far too small. I had to put nearly my entire bodyweight on it and get someone else to screw it shut. Other than that, the case is quite nice looking, easy to clean, a good size for a mid-tower. SSDs and HDDs fit neatly in the back but in such a way that it can be a real stretch to fit SATA power to everything because of the way the cables have to lay to not look like a mess, or press to hard against the glass.
Rated 5 out of 5 by Hennouk from Corsair Crystal mid tower computer chassis tempered glass 3x 120 mm RGB fans After I had got everything I realised I needed a new tower to house everything and this one fitted the bill made of tempered glass with 3 fans that light up looks so cool at night
Rated 5 out of 5 by BOM8ER from Amazing all round case Very good looking and very easy to work on, even for custom loops.
Rated 5 out of 5 by Charlie13 from A stunning enthusiast case This case is easy to build in and easy to access, due to the 4 thumbscrews securing the glass to the case. The tempered glass panels are slightly smoked, but allow enough light through for you to still see your components. The case has welcome cable management features, like a metal bar, which conceals the rubber grommets from the right-hand side of the case, and cable tie anchors all around the perimeter of the ,motherboard tray.
Rated 3 out of 5 by Sammaye from So good yet, so bad This case is amazing looking, no doubt about it. But in their haste to get a tempered glass case out Corsair has rushed and created a case which has less features than a £20 case from Ebay. There is no HDD light, no reset button, you cannot remove the PSU cover, the fans are not PWM, cleaning the case is very difficult, the magnetic filters need more magnets in the right places and overall, unless you are a showboat who cares more that people can see how egotistical you are, this case is kind of worthless. Really great concept but poorly implemented.
Rated 5 out of 5 by Laci017 from Simply amazing!t Stunning look! Worth every penny! I can't tell how good is that case, simply awesome looking, my best PC case ever! So elegant, I love it. I can not give you any non-subjective comment. It is just the best case...

Is it possible to fit a Blu-ray player in this chassis?

Asked by: Polski
Nope but as it has usb slots you could hook up a external one and use it that way
Answered by: Hennouk

How many ports on lighting controller?

How many ports are on the lighting controller, and are they compatible with the HD140 RGB Fans also from Corsair?
Asked by: DanielWoodward
6 ports and yes they are
Answered by: Sammaye
Corsair Crystal 570X Tempered Glass RGB PC Gaming Case