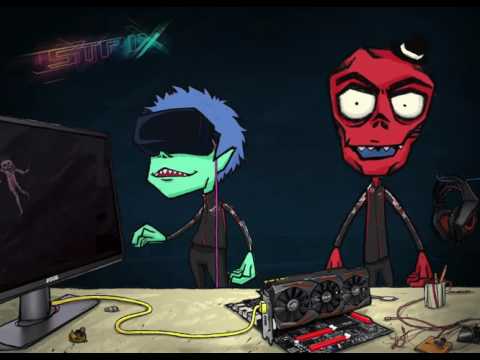 The next stage up in ASUS 1060 graphics cards is this, the Strix Gaming OC. This gaming card is aimed toward those that want all they can get from their GPU, and with higher base speeds (compared to the Strix 1060) that can be overclocked, the 1060 OC does just that. The embedded power will create immaculate gaming experiences on even the latest next-gen games. Plus, thanks to the featured tech and clever design you can be sure this GTX 1060 will run smoothly even on those extended gaming sessions.

The GeForce GTX 1060 graphics card is loaded with innovative new gaming technologies that make it the perfect choice for the latest high-definition games. Powered by NVIDIA Pascal™—the most advanced GPU architecture ever created—the GeForce GTX 1060 delivers brilliant performance that opens the door to virtual reality and beyond. #GameReady The GTX 1060 will achieve up to 30% extra cooling performance when gaming thanks to the exclusive DirectCU III cooling technology. This tech featured on the GTX 1060 direct-GPU contact heat-pipes that will transport more heat away from the GPU and out-perform the reference designs.

*Image for illustration only. Actual design may vary When gaming it is commonly found that GPU temperatures are higher than that of the CPU, due to chassis fans usually referencing CPU temps only - resulting in inefficient cooling. The Strix 1060 graphics card features two 4-pin GPU controlled headers that can be connected to system fans for targeted cooling on your GTX 1060. ROG Strix graphics cards have two HDMI ports for connecting a VR device and three display at the same time, so you can enjoy immersive virtual reality experiences anytime without having to swap cables.


The market for graphics cards priced at Â£250 has been hotting up since both AMD and Nvidia released GPUs based on their latest architectures. AMD has been more eager to pinpoint the sub-Â£200 market with two GPUs - the Radeon RX 480 and Radeon RX 470. Specifically, if you can find one, the Sapphire RX 480 Nitro 4GB is arguably the best card south of this all-important figure.


NVIDIA is gearing up to launch the third-rung GeForce GTX 1060 with both reference Founders Edition form and with partner boards arriving at the same time, July 17.