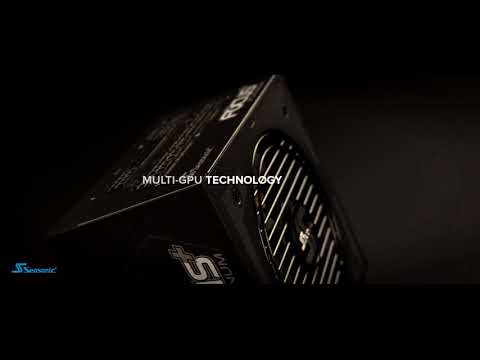 Scan code: LN100738 Manufacturer code: Focus GX-750
Share Facebook Twitter Google Reddit Pinterest LinkedIn
£109.99
Add To Basket
In stock
Order now and receive it by Wednesday, 12th May
From £9.88 / month (APR 14.9%)
If you are approved for a credit limit with PayPal Credit and use it for future purchases, the APR for those purchases won't be more than 21.9% and may be even lower. 750W Seasonic Focus GX 750 80PLUS Gold, Single Rail, Fully Modular, 62A, 120mm Fan, ATX PSU is rated 5.0 out of 5 by 4.
Rated 5 out of 5 by Elliot from High Quality Top Brand power supply. Comes with lots of modular connectors & is a fair price for what it represents.
Rated 5 out of 5 by Nogreens from Good option on a budget My old cheap Corsair PSU decided to develop coil whine at the worst possible time. In the middle of lockdown PSU options were very limited, most models were either sold out, on backorder with no clear ETA or overpriced on eBay. I was a bit sceptical about buying this model as I've read that the older Focus Plus model was not the best choice, however through online research I was assured that the issues it suffered from were addressed by Seasonic with the new focus GX so I caved and bought it. So far I wasn't disappointed. The product is fully modular, feels and looks premium and the installation was fairly straightforward. It does what it says on the box. I haven't used it in fanless mode because it's quiet either way. Most importantly, the coil whine is gone! Both the product and next day shipping were reasonably priced.
Rated 5 out of 5 by basrick from prepare to be amazed This product not only surprised me as I opened the packaging but its performance and quality is superb. Seasonic delivered a great psu with imo a great efficiency curve. But before you get to that, it comes with all the leads and more you will need for your build in a neat and tidy bag separate to the bagged psu along with zip/cable ties and velcro cable management ties and a 24 pin jumper plug to test the psu out before you build your machine. They thought of everything. They have you covered when it comes to stable power delivery and aesthetically pleasing psu, it has a hybrid button for low power usage mode and can be mounted up or down depending on your case. If you don't have cable extensions for your build fear not, all cables here are shrouded and black so no ketchup and mustard here which seems to be the trend nowadays and that's only a good thing. I run a 5700xt nitro and I chose 750w and this bad boy doesn't skip a beat.
Seasonic Focus GX 750 750W Modular 80+ Gold PSU/Power Supply