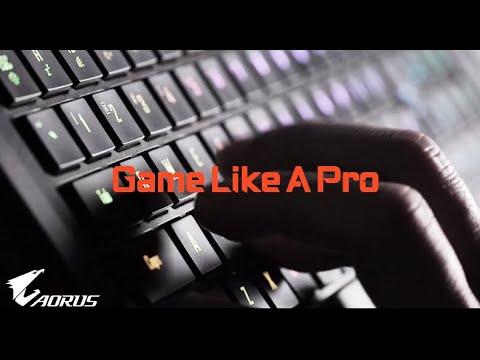 Ultimate Gaming Laptop Equipped with OMRON Mechanical Switches Once again AORUS takes the lead in the industry through the collaboration with world renowned mechanical mouse switches and external mechanical switches provider, OMRON. Resulting in the creation of the all-new AORUS Series of innovative gaming laptops with a uniquely designed keyboard for true gamers. Not only does the AORUS 17X have a phenomenal keystroke sensation, it also represents a Japanese spirit of seeking quality finishes, in addition to the smoothest and vivid background keyboard lighting which is customisable using AORUS RGB Fusion 2.0 software, it's the slimmest and lightest gaming laptop, giving gamers the best companion for the battlefield. Powered by an incredible 8 core processor, the Intel® Core™ i7-10875H, with a clock speed of 5.1Ghz – gamers can experience amazing performance paired also with NVIDIA® GeForce® RTX 2080 SUPER™ graphics, based on the NVIDIA Turing™ GPU architecture with real-time ray tracing, artificial intelligence, and programmable shading. The 17.3" AORUS 17X features a FHD IPS thin bezel panel with ultra-fast 240Hz refresh rate for smooth gaming experiences. Light up the room with colourful keys via AORUS RGB Fusion 2.0 The AORUS 17X Series is equipped with an extreme mechanical keyboard, as AORUS joins the world renowned mechanical switches innovator (OMRON), creating the world’s first laptop with OMRON mechanical switches. Built for gamers looking not only for visual and audio excellence but a sensational feel, with every key comes at an optimal actuation point of 1.6mm with an ultra-durable keystroke lifespan of up to 15 million times. Plus, the keycaps are made with a concentric design that lets the lighting shine through for an even more vivid lighting experience. Gamers can control and customise every single key of the AORUS 17X keyboard with AORUS RGB Fusion 2.0 lighting setting software.

Equipped with a Powerful 8 Cores, Intel Core™ i7 Processor.

This IS the Multitasking Monster You've Been Waiting For You can easily play the latest AAA titles and use incredible power to dominate the battlefield. As this laptop features an 8 core processor, the Intel® Core™ i7-10875H, with a clock speed of 5.1Ghz. In addition to Intel® Thermal Velocity Boost dynamic technology, gamers can expect flying speeds when it comes to media processing and gaming experiences.

Control Your GPU Option with AORUS Graphics Switch This edition of the 17.3" AORUS 17X gaming laptop is equipped with a powerful NVIDIA® GeForce® RTX 2080 SUPER™ GPU, based on the NVIDIA Turing™ GPU architecture with real-time ray tracing, artificial intelligence, and programmable shading bringing gamers a whole new experience. Deep Learning Super Sampling (DLSS) uses deep learning and AI to train the GPU, rendering crisp images, while running 2x faster than previous generation GPUs that runs conventional anti-aliasing techniques.
The “Graphic Switch“ in the AORUS Control Center, allows gamers to switch different GPU modes in order to suit the situation. Gamers can go max performance with the discrete NVIDIA® GPU or save battery power by using the NVIDIA® Optimus™ technology, no matter what, the control is in your hands. Exotic Car. Fighter Jet. Fire Phoenix. The AORUS 17X chassis combines elements of rapid and powerful design, expanding its original design inspiration taken from fighter jets, exotic cars and of course the phoenix. Each and every line is carefully thought through, giving the chassis a raging sense of freedom and power through its metal construction, in addition to the thin bezel design, the whole chassis screams of a soul that wants to conquer them all.

Refreshes so Fast your eyes Won't Believe it's a Game

Now, Your Ferrari Shows It's True Colour. The AORUS 17X has been designed with an IPS level Full HD gaming display for unforgettable visusals, in addition to a 240Hz gaming panel that has an insanely high refresh rate and shortest response rate of just 3ms, enough to combat motion blur that may determine victory within the game. The AORUS 17X not only comes with a revolutionary display, each display is also tuned by X-Rite Pantone® calibration before it leaves the factory. With an accuracy of Delta E < 1*, expect a display that shows exceptional colours that the game creator has intended. Fight all Day and all Night Without Losing your Cool

IMPRESSIVE WINDFORCE INFINITY COOLING SYSTEM The AORUS 17X has been engineered with the latest WINDFORCE Infinity Cooling System, is up by 37%*, not only does it help the AORUS 17X achieving 100% CPU and GPU outputs but also remains quite and stable at the same time * Compared to the AORUS X9. AORUS first, equipped with a large Vapor Chamber, with a large increase in heat dissipation efficiency. FIVE HEATPIPESThe internal chassis consists of 5 total heat-pipes, with 3 of the heat-pipes expell heat from the CPU and GPU.

FOUR VENTSFour exhaust vents and intakes from underneath effectively cool the chassis with excellent airflow.

Equipped with Ultra-Fast SSD The AORUS 17X comes fully equipped with two high-speed PCIe 3.0 4x SSD slots and 1x HDD that lets gamers read large files or firing up games in a matter of seconds. You will always be ahead of everyone else!
* Product specifications and availability may vary by country and region. We recommend you to check with your local dealers for the latest product information.

Upgrade your Every Moment The AORUS 17X comes with industry only Microsoft Azure AI technology. The artificial intelligence will know that game is running and dynamically set the best CPU and GPU wattage setting for optimal gaming performance. Everything is done automatically so gamers won’t need to additional setting.

Zero Lag with Killer™ Wi-Fi 6 AORUS 17X is equipped with the all new Killer™ E2600 LAN internet chip and the all new AX1650 wireless network card. The AX 1650 further supports next generation internet standard 802.11AX (Wi-Fi 6) with a transfer speed of up to 2.4Gbps, in addition to the Killer™ exclusive data package arrangement technology, gamers get in game data stability.

Gear up, Game on and Expand Possibilities.