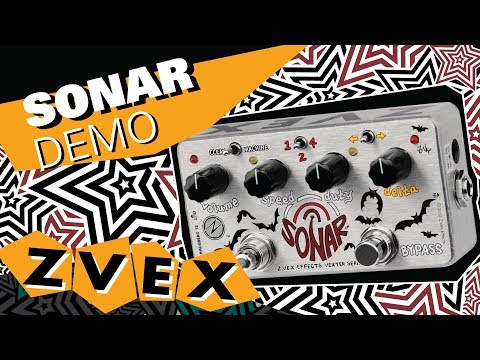 Scan code: LN88554 Manufacturer code: ZVXVEXSONAR
Share Facebook Twitter Google Reddit Pinterest LinkedIn
£219.00
Add To Basket
In stock
FREE DELIVERY ON YOUR ENTIRE BASKET
Order now and get it tomorrow, Fri 18th Jun
From £10.52 / month (APR 14.9%)
If you are approved for a credit limit with PayPal Credit and use it for future purchases, the APR for those purchases won't be more than 21.9% and may be even lower.

Calm and classic to modern mayhemThe ZVEZ Sonar Vexter isn’t just a standard tremolo pedal, it is capable of slicing up any signal you put through it. It can reduce your high gain signal completely, unlike usual tremolo pedals. It can also sound transparent like a traditional tremolo effect. On top of this it can increase or decrease tempo, the amount of time the tremolo takes place during a cycle, or both at the same time. Packed with additional controls such as, tap tempo, attack, release, and depth controls. And last but not least the Sonar comes with aZVEX Machine™ circuit directly integrated.