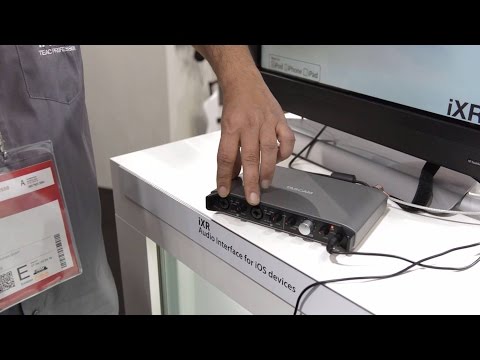 Scan code: LN72625 Manufacturer code: IXR
Share Facebook Twitter Google Reddit Pinterest LinkedIn
£124.99Item currently awaiting an ETA
Pre Order
Pre order
FREE DELIVERY ON YOUR ENTIRE BASKET
From £10.75 / month (APR 5.9%) or 0% for 4 months
If you are approved for a credit limit with PayPal Credit and use it for future purchases, the APR for those purchases won't be more than 21.9% and may be even lower.

iXR is an audio/MIDI interface for mobile recordings with an Apple iPad. It provides two analogue inputs and outputs and MIDI In/Out, and can work equally well with microphones, line signals and instruments. With its slim aluminium casing, ultra HDDA preamps and sampling rates up to 96 kHz it meets the high demands of iPad users in terms not only of its looks but also its sound quality. And it can also be used with Mac and Windows computers.

iXR has high input sensitivity so it can produce good results from relatively weak dynamic microphones, and can be operated as a standalone unit – ideal for practice sessions, for example. The output and headphone levels can be adjusted independently of one another, and licences for the Cubasis LE app and for the Cubase LE DAW software are included.

Features
• Two high-quality audio inputs and outputs for your iPad.
• Use it with dynamic or condenser microphones to record vocals.
• Use it with instruments – record keyboards or guitar with or without effect pedals.
• Use it with line-level sources to record a live concert from the mixing console, for instance.
• Software plug-ins can be used for additional effects.
• Ultra-HDDA preamps and sampling frequencies of up to 96 kHz (at 24-bit resolution) for the ultimate sound.
• MIDI I/O.
• Direct input monitoring with zero latency.
• Independent level controls for line out and headphones out.
• Connects directly to your iPad with a Lightning cable.
• Can be used with Mac or Windows computers.
• Additional settings available via the software settings panel.
• Turn each input on or off.
• Select which signals are output from the unit: iOS/computer playback only or a mix of the input signals and the signal sent from the iOS device or computer via USB.
• Choose whether signals are monitored on the unit in mono or stereo.
• Sleek, rugged aluminium case.
• Use an Apple AC adapter or any other USB-compatible power supply (power packs, Tascam BP-6AA, etc).
• Automatic power saving (can be switched off).
• Includes license for Cubase LE and Cubasis LE.
Warranty

Does this work with the 2018 iPad Pros that have USB-C connectors?

This seems to be made with connecting it to an iPad via a lightning cable in mind. The new (2018) iPad Pros have USB-C connectors, will it connect to one of them and function correctly?
Asked by: DavyStrange
I tried getting the two to connect, and it is relatively simple but you must have the Apple USB-C Digital AV Multiport Adapter that adds an extra &pound;75 to the cost of your iPad Pro (if you get it from Apple). You need to connect the adapter to your iPad Pro, connect the USB-C port to a power supply of reasonable grunt, then connect the USB-A port on the adapter to the USB-B port on the iXR which will provide the unit with power and connectivity to the iPad Pro, that is in effect connecting to the iXR as if it were a normal computer. I set this up easily and the Tascam iXR control panel recognises that the unit is attached as did Cubasis when I tested if that was worked. With this method everything works fine. You may be able to use a 3rd party AV adapter, but I wouldn't recommend it as Apple are very fussy about what you are allowed to use with their precious devices. You cannot just use a usb-c to USB-a or -b cable to connect the iPad Pro to the iXR as this does not provide power to the iPad or the iXR. Unfortunately the Apple adapter is required, making this a 'not cheap' solution. However, it does mean that if you upgrade to a new iPad Pro, that I highly recommend as they are top bunny devices, there is a solution to keep using your iXR, which is a wonderful little device I also highly recommend. Simples!
Answered by: DavyStrange2
Tascam iXR Audio Interface for iPad, Mac and PC