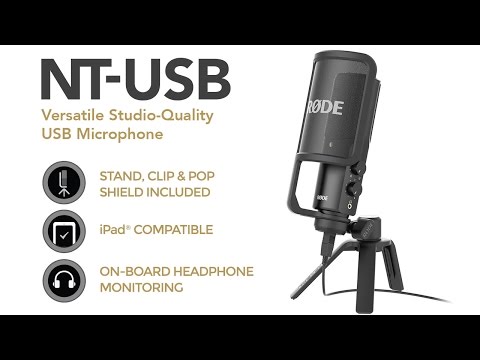 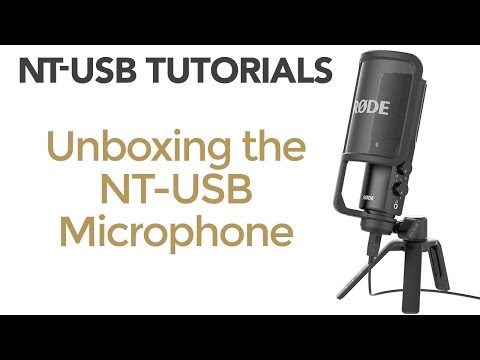 Scan code: LN59642 Manufacturer code: RODENTUSB
Share Facebook Twitter Google Reddit Pinterest LinkedIn
Order now and get it tomorrow, Wed 6th Jul
£125.00
Add To Basket
Get it Tomorrow, 06 JulIn stock
FREE DELIVERY ON YOUR ENTIRE BASKET
From £10.75 / month (APR 5.9%) or 0% for 4 months
If you are approved for a credit limit with PayPal Credit and use it for future purchases, the APR for those purchases won't be more than 21.9% and may be even lower. USB Condenser MicrophoneRODE’s ‘NT-USB’ is a hugely versatile, side-address microphone which is excellently suited for recording vocals (both sung and spoken) and musical performances, alongside spoken applications such as voice-over work and podcasts.

It’s 100% compatible with all mainstream recording applications on both Windows and MacOS systems, alongside iOS devices such as the Apple iPad using RØDE Rec, GarageBand and various other apps which accepts an external mic. To utilise the iPad, a suitable USB adaptor, such as Apple’s ‘Camera Connection Kit’, is required.

studio accessories includedThe NT-USB’s sleek body sports a zero-latency stereo headphone monitoring (3.5mm) jack, to enable you to monitor the mic input in real time, alongside dials to adjust the monitoring level and mix between the computer/iPad audio and the mic input.

RODE also included a superbly-effective pop-shield, which easily fits to the base of the mic, positioning the shield the optimal distance from the capsule will dramatically limit plosives during vocal sessions. Also included is a high-quality stand mount, featuring industry standard 3/8” thread, a desktop tripod stand which allows the NT-USB to sit at an optimal height upon a table top, and a protective carry case for storage and transportation.

RØDE NT-USBIntroducing the RØDE NT-USB. A complete solution for studio recording at home, in the office or out and about. Compatible with Mac OS X, Windows and iOS. Additional Notes:
All RØDE Microphones are covered by a limited warranty for one (1) year from the date of purchase.This warranty can be extended to ten (10) years from the date of purchase. To be eligible for the extension of the warranty, the original purchaser must register the purchase of their RØDE Microphone online. The terms and conditions of the original warranty will then apply for the term of the extended warranty period.

For the RØDE M1 live dynamic microphone only, this warranty can be extended to the lifetime of the product from the date of purchase. To be eligible for the extension of the warranty, the original purchaser must register the purchase of their RØDE M1 live dynamic microphone Microphone online at www.rode.com. The terms and conditions of the original warranty will then apply for the term of the extended warranty period.

RØDE Microphones 5 Year Limited Replacement Warranty - Terms and Conditions All RØDE Microphones are covered by a limited warranty for one (1) year from the date of purchase.This warranty applies only to the RØDE HS1, RØDE Pin Mic and RØDE Lavalier microphones.This warranty can be extended to five (5) years from the date of purchase. To be eligible for the extension of the warranty, the original purchaser must register the purchase of their RØDE Microphone online at www.rode.com. The terms and conditions of the original warranty will then apply for the term of the extended warranty period.

Rode NT-USB Versatile USB Condenser Microphone, Includes Pop Shield and Tripod Mount is rated 5.0 out of 5 by 3.
Rated 5 out of 5 by JenS from Amazing! I recently upgraded from a Blue Yeti to the Rode NT-USB, and I am amazed by the sound quality. The Yeti picked up way too much background noise and hissing. The Rode NT-USB however is so quiet in comparison to the Yeti, and the quality in my voice is so much better. I sound more crisp and clear, more have more of a natural tone in my voice. My friends have told me how much better I sound, they can definitely tell between the Yeti and Rode-USB in my voice. It screwed on nicely to my mic boom arm, the pop filter that comes attached doesn't get in the way and looks really smart. I won't be using the tripod that comes with it so can't really comment. It also comes with a posh carry pouch to put the rode in for travels. One thing that was a bit annoying is it comes with a 3m cable which in my case is not neccessary and I had to wrap the cable around my desk leg, but for other people this is really handy. Overall I am very happy with the build quality of the mic and sound quality, a 5/5 stars from me.
Rated 5 out of 5 by Kevin6 from WOW WOW just WOW this mic is fantastic. I have about six other mics that I also use and some costing much more than this one. But this Rode NT-USB mic beats them all hands down. If your looking for a great mic that's easy to set up then this is the mic for you.
Rated 5 out of 5 by Razzy from Better than the competition It was a toss up between this and the blue yeti pro. After reading reviews and trying both (lucky to have known people who had one of each) I went with this Rode NT-USB. The pricing is good value for money considering few if any of the compeitiors come with pop shields etc. Build quality is fantastic! Sound quality for a USB mic is also fantastic! Would recommend to anyone looking for a USB mic.
Rode NT USB Condenser Microphone USB