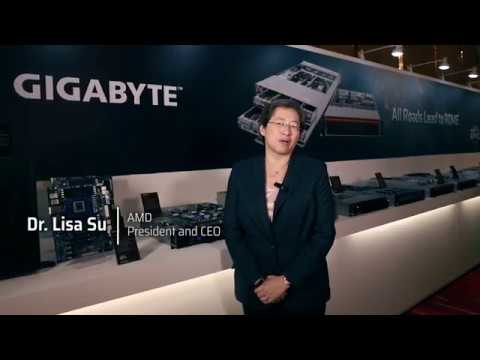 Scan code: LN100499 Manufacturer code: 6NR282Z92MR-00
Share Facebook Twitter Google Reddit Pinterest LinkedIn
£2,807.99Item currently awaiting an ETA
Pre Order
Pre order
From £65.62 / month (APR 5.9%) or 0% for 4 months
If you are approved for a credit limit with PayPal Credit and use it for future purchases, the APR for those purchases won't be more than 21.9% and may be even lower. Welcoming the Next Generation of AMD EPYC ProcessorsThe next generation of AMD EPYC has arrived, providing incredible compute, IO and bandwidth capability – designed to meet the huge demand for more compute in big data analytics, HPC and cloud computing. Built on 7nm advanced process technology – the best the industry has to offer, allowing for denser compute capabilities with lower power consumption. Capable of Support for the world’s first 64 core data center CPU and its family of processors, built using Zen 2 high performance cores and AMD’s innovative chiplet architecture. The world’s first mainstream PCIe Gen 4.0 data center CPU with a bandwidth of up to 64GB/s, twice of PCIe Gen 3.0. Embedded security protection to help defend your CPU, applications, and data. Double the bandwidth for faster connections AMD EPYC Rome is the world’s first mainstream data center CPU to support PCIe Gen 4.0, with a bandwidth of 64GB/s, twice that of PCIe Gen 3.0. This doubles the bandwidth available from the CPU to peripheral devices such as graphics cards, storage devices and high speed network cards. GIGABYTE’s AMD EPYC 7002 Series server platforms are ready to be used with a new generation of PCIe Gen 4.0 devices. MANY NEW ADVANTAGES COMPARED TO OCP 2.0 CARDS GIGABYTE’s AMD EPYC Rome Server Platforms feature an onboard OCP 3.0 mezzanine slot for the next generation of PCI Gen 4.0 add on cards. Compared to previous OCP 2.0 type cards, advantages of this new type include: Tool-less Rail KitsRail kits attach to the side of the server chassis via clipping mechanism. •No need to install core components such as CPUs, memory, drives and OS.

•No need to power on the system (NB. PSU must be connected). Cold Redundancy To take advantage of the fact that a PSU will run at greater power efficiency with a higher loading, GIGABYTE has introduced a power management feature called Cold Redundancy for servers with dual PSU. When the total system loading falls lower than 40%, the system will automatically place one PSU into standby mode, enabling the other PSU to take over the greater load. This can enable total system power efficiency savings of up to 10%. Smart Crises Management / Protection SCMP is a GIGABYTE patented feature that will automatically force the system’s CPU to enter ULFM (ultra-low frequency mode for minimum power consumption) when the BMC is alerted to a PSU fault or error (such as power loss, power surge, overheating or a fan problem). This feature will prevent shutdown in systems with less than 1 + 1 PSU redundancy when one PSU is lost.