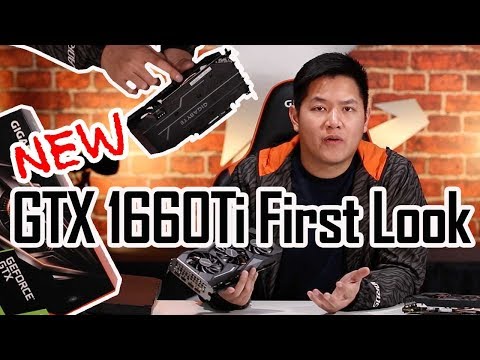 Scan code: LN96585 Manufacturer code: GV-N166TOC-6GD
Share Facebook Twitter Google Reddit Pinterest LinkedIn
Order by 8:30 PM today and get it tomorrow
£395.99
Add To Basket
Get it Tomorrow, 26 MayIn stock
From £17.51 / month (APR 5.9%) or 0% for 4 months
If you are approved for a credit limit with PayPal Credit and use it for future purchases, the APR for those purchases won't be more than 21.9% and may be even lower.

Gigabyte GTX 1660 Ti OC WITH TURING The Gigabyte GeForce GTX 1660 Ti OC series delivers the ultimate PC gaming experience. Powered by the new NVIDIA Turing GPU architecture and the innovative GTX platform, featuring 6GB GDDR6 192-bit memory interface that has a 1800 MHz Core Clock, this is a completely new way to experience games. Built with Gigabyte's Windforce cooling see improved performance in your GPU as the fans alternate their spinning motion allowing hot air to be pushed out quickly whilst reducing turbulence. With a unique blade fan and 3D Active Fan System driving cooling performance you can expect low temperatures even at high loads, and to help the direct touch technology is were the shape of the copper pipes maximizes the direct contact with the GPU resulting in faster heat transfer.