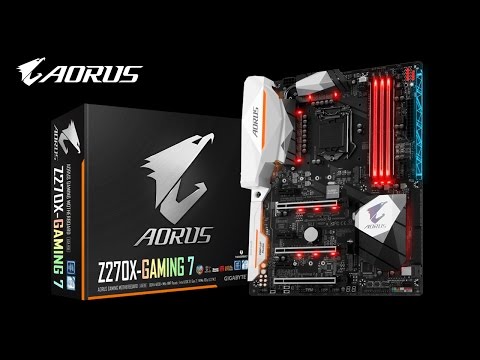 The Gaming-7 motherboard from AORUS is part of their 200 series motherboards that boast the most advanced LED system in the market today. The Z270 board’s customisability and its intuitive UI (thanks to the RGB Fusion App) allow you to make your AORUS motherboard your own. Filled with countless technologies to help enhance gaming, audio, style and more this Z270X motherboard is equipped to handle the requirements of anybody. Plus, it boasts durable and reinforced components from PCIe lanes to capacitors, this AORUS motherboard is sure to advance your gaming PC in multiple ways.

Match your Motherboard with your PC

AORUS' 200 series motherboards boast the most advanced LED system in the market today. With more customizability than ever and a convenient and intuitive UI thanks to the RGB Fusion App, you’ll have a blast making your AORUS your own. LED enthusiasts now have even more options with the ability to customize multiple zones independently. For a more functional use, the bright and vibrant LEDs can be configured to display the PC’s temperature or load. For even more LED goodness RGBW strips are now supported for more true and vibrant whites. Three different light zones are equipped with bright RGB LEDs, namely the CPU Zone, Armor & Audio Zone and Accent LED Zones. When it’s all set and done, your system will shine like never before.

AORUS brings even more color and life to your system with an Accent LED Overlay. This overlay complements the RGB Fusion technology in AORUS Motherboards adding more flare and style to your gaming machine. With the swappable overlay users can utilize different patterns and designs to make their system their own.

The photos are for reference only.

With the all new RGB Fusion software, users have access to different preset LED lighting configurations with choice of colors. You can even set the LEDs to synchronize with your favorite music or have them change colors to indicate the CPU temperature.

For true lighting experts there is an Advanced Mode, which can be fully customized by individual area with its own effects and color transitions, along with specific duration and transition times.

Once done, it’s simple to save and share your lighting profile with others. All Hybrid Fan Headers can automatically detect the type of cooling device whether it be fan or pump with different PWM or Voltage mode. Plus, it supports up to 2 amps with built-in overcurrent protection—a must for high-end high current fans.

Interoperable Sensors and Fans - Each fan can be customized to operate at different speeds according to any defined temperature source input (except the CPU fan). Image for display reference only.

SBX Pro Studio suite of audio playback technologies deliver a new level of audio immersion. Realistic surround sound, the ability to clearly hear specific sounds in a gaming environment are just a few elements of SBX Pro Studio that enhances the overall experience, be it movies, games or music. Amp-UP audio features customisation by allowing it's users to choose audio quality based on individual listening preferences, plus it hosts a wide availability of additional OP-AMPs. Boasting a low Cost way to dramatically improve audio quality, this technology improves audio dynamics and overall sound-quality without the need for expensive speakers or high-end audio equipment.

AORUS improves upon USB DAC-UP technologies with USB DAC-UP 2 as it continues to provide clean, isolated and low-noise power while adding the ability to compensate for voltage drop. Virtual reality pioneers and gamers alike can rest assured that their expensive accessories and peripherals will not encounter connectivity or power deficiency issues with the AORUS USB DAC-UP 2. With Gaming Gear drawing large amounts of power and having firm specification requirements USB DAC-UP 2 is up for the challenge.

The above photos are for reference only. Feature may vary by model.

The new Intel 750 series SSDs offer an incredible increase in performance over SATA drives. Using the NVMe protocol which takes advantage of the fast bandwidth of PCIe Gen3 x4 lanes (32 Gb/s), the drives are a clear advantage for users looking to boot their OS faster, load their games in a flash and access large files without waiting. By implementing the U.2 port onboard to support the 2.5” Intel 750 Series drive, AORUS ensures that the users can benefit from the best performance. Powered by Intel's own Thunderbolt controller the new Thunderbolt 3 protocol, which is available over a USB Type-C connector on the back I/O of the AORUS' motherboards, brings an unprecedented single-wire bandwidth of up to 40 Gb/s -- twice more than the previous generation of Thunderbolt! This incredible increase in bandwidth is also accompanied with support for different protocols such as DisplayPort 1.2 and USB 3.1, which is backwards compatible with USB 3.0 and USB 2.0, opening up a world of new possibilities.

Support for DisplayPort 1.2 makes Thunderbolt 3 a must have for any enthusiast. The Z270X-Gaming 7 is able to support a display in 4K resolution at 60 FPS. In addition, Thunderbolt 3 over USB Type-C has revolutionary industry-first features such as Power Delivery 2.0, and the ability to daisy-chain up to 6 devices thanks to the Z270X-Gaming 7's USB Type-C port. Support for DisplayPort 1.2 makes Thunderbolt 3 a must have for any enthusiast. The Z270X-Gaming 7 is able to support a display in 4K resolution at 60 FPS. In addition, Thunderbolt 3 over USB Type-C has revolutionary industry-first features such as Power Delivery 2.0, and the ability to daisy-chain up to 6 devices thanks to the Z270X-Gaming 7's USB Type-C port. Turbo B-Clock Tuning IC in the AORUS 200 series motherboards enable overclockers to have the ability to change their BCLK frequency to a desired value of their choice. With the new linear range adjustment option of the Tuning IC, ranges from 90MHz to 500MHz are now possible, so that overclockers are not limited to the 5% ranges of traditional straps.

*Turbo B-Clock overclocking range may vary according to CPU capabilities. Hardware Troubleshooting at a Glance

Onboard LEDs controlled by the system BIOS indicate if a malfunction is occurring, allowing users to quickly diagnose which major component (CPU/DDR/VGA/HDD) is malfunctioning so they may take action promptly.

AORUS is offering a tested and proven platform that ensures proper compatibility with profiles up to 4133MHz and beyond. All users need to do to attain this performance boost is to ensure that their memory module is XMP capable and that the XMP function is activated and enabled on their AORUS motherboard.

What is XMP?
DDR4 memory modules are available at a stock frequency of 2133MHz, but as frequency tweaking requires a considerable amount of effort and knowledge, memory vendors encode XMP profiles which can automatically modify the timings of the supported memory modules to work with your CPU and to achieve increased performance. A motherboard with true resistance and durability

Sulfur compounds in the air can penetrate tiny onboard resistors creating chemical change and causing these resistors to open or short. If either of these occurs the motherboard will fail to function. By equipping resistors with an Anti-Sulfur Design AORUS gives Ultra Durable Motherboards a whole new meaning. Ultra Durable motherboards from GIGABYTE feature their DualBIOS technology, an exclusive technology from GIGABYTE that protects arguably one of your PC's most crucial components, the BIOS. GIGABYTE DualBIOS™ means that your motherboard has both a 'Main BIOS' and a 'Backup BIOS', protecting users from BIOS failure due to virus, hardware malfunction, improper OC settings or power failure during the update process.

AORUS motherboards integrate the absolute best quality solid state capacitors that are rated to perform at maximum efficiency for extended periods, even in extreme performance configurations. With ultra-low ESR no matter how high the CPU load, this provides peace of mind for end users who want to push their system hard, yet demand absolute reliability and stability. These exclusive capacitors also come in customized jet black, exclusively on AORUS motherboards. AORUS motherboards come equipped with a 15 microinch thick gold plated CPU socket, which means that enthusiasts can enjoy absolute reliability and longevity for the CPU socket overtime, without having any concerns about corroded pins or bad contacts. The tiny cables of the front panel connectors can be hard to manipulate as space is restricted and indicators being tiny. With the G-Connector, you can connect all the FP cables at once, simplifying the process of building your next PC and saving you some frustrations. To create a seamless VR experience AORUS Motherboards offer the best features to make your virtual reality feel like your actual reality.

Any copyrighted images or trademarks displayed are the property of their respective owners and are shown for reference purposes only. Reference herein does not constitute or imply affiliation or endorsement of Gigabyte products by the respective trademark owners.
VR Gaming photo for reference only.