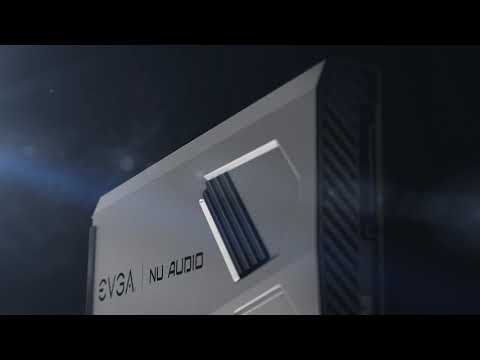 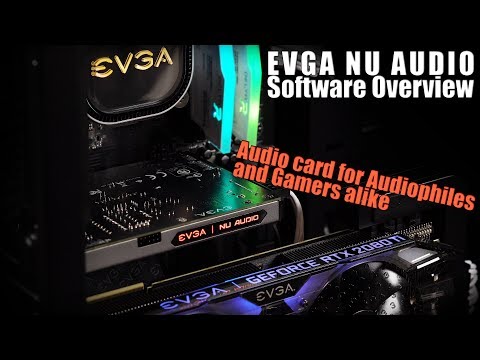 Bring Your Next-Gen System, to the Next Generation of Premium Audio For nearly 20 years, EVGA has built the most powerful graphics cards to play your games at the highest settings, powerful motherboards to run your system at optimal settings, and reliably efficient power supplies to power your system. Now, EVGA extends its enthusiast tradition by partnering with Audio Note (UK), Ltd. to provide the most immersive audio and lifelike gaming experienced on a PC with EVGA NU Audio Card.

Updated and Upgraded
Since it's release, Nu Audio has had many key features added to it's software control panel, which now mean that it's equally as good for music production and gaming as it is as a high end HI-FI Soundcard.
For gamers, it now features virtual surround sound developed by Nahimic, to relay ultra detailed positional information. For music production, the ASIO driver now has buffer size controls, to enable low latency performance. Audio Note (UK), Ltd. has been in the high-end audio business for over 30 years, making a name for itself by producing a wide variety of analog and digital devices. A core component of Audio Note's philosophy is to research, design, and build its own components - often custom-made for the specific application - without financial limitations to create the finest audio products available. With this in mind, EVGA partnered with Audio Note (UK), Ltd. to select audiophile-grade digital and analog components and carefully craft the NU Audio card. "Hear music the way the artist wants you to hear it."
This is a common refrain to describe audio equipment. Instead, the NU Audio card simplifies the matter - hear audio as it is.


The Right Gear for the Game Engineered by Audio Note means improved enemy detection due to lower measured and perceived noise floor; precise enemy location due to improved transient and phase response; and, vital for staying alive, reduced fatigue and increased sense of involvement so awareness remains high even after long, intense missions. With a built-in microphone port, play with confidence knowing that you will be heard clearly-in game. Enjoy movies, produce music, record podcast, or simply experience great audio. Hear all the subtle sounds, emotional dialog, and powerful explosions to keep you on the edge of your seat without the need to browse through confusing menus. With recording performance up to 384kHz, 32bit, you can speak the way you want to be heard. After all, only you should sound like you. The NU Audio Card enhances the relationship to music and mood. Change the 10-Mode RGB to match your favourite colour, or use any of the four Audio Reactive Lighting options to let your audio set the tone and colour of the NU Audio Card lighting. Alternatively, simply turn the RGB off if you'd prefer to keep things dark.

High-quality audio is built on a simple premise: everything must be solid from start to finish. One weak link in the chain can turn a symphony into a cacophony. The NU Audio card features a high-performance digital section with Native DSD support and a clean, powerful analog section. This audio quality carries over to other applications, such as gaming, where the ability to clearly identify the difference between ambient environment noise and a stealthy enemy can be the difference between life or death.

The analog section is responsible for returning audio without distortion and fine tuning the sound to ensure it remains as faithful to the source as possible.


From Source to Playback

The digital side of the EVGA NU Audio Card is responsible for processing your source audio at the preferred format or converting the audio to and from analog, without affecting the internal makeup of the source audio. These components were chosen for their efficiency and resistance to adding artefacts during the process.

Powered by specialised Audio Note (UK), Ltd. audio-grade capacitors and audio-grade resistors, your audio remains noise and distortion free as it passes through to your choice of speakers or headphones.

The NU Audio Card is built using a high-quality silver and gold-plated multilayer PCB, with isolated dual ground planes for analogue and digital circuitry. Furthermore, NU Audio is aesthetically appealing, with a stealth exterior, and programmable RGB lighting which can be disabled for strict audiophile performance.

Audio Note Standard, Nichicon solid and Panasonic FC capacitors are extensively used, together with high performance MLCC types. All audio circuitry uses AN Standard capacitors in the power rails, and the method of multiple bypass pinning is used, where many smaller capacitors are used to pin the + and – rails relative to the ground planes.

One for 44.1kHz sample rate multiples, one for 48kHz multiples. These provide precise, low-jitter on-card clocking for the ADC and DAC sections and support asynchronous/isochronous operation, which minimizes jitter. It's often stated that 'bits are bits', but audio is a real-time, dynamic frame, such that it’s not just the bits that are important, but also their timing. Small, fluctuating errors in timing are known as jitter, which causes noise and distortion, and in ways not directly comparable to the analog domain.

AKM AK4493 32 bit, 123dB DNR capable DAC solution, selected based primarily on audio quality. AKM technologies like Velvet Sound and advanced materials used in silicon, the lead frame, and chip packaging result in a superior sounding converter. Natively supports all sample rates from CD (16 bits, 44.1kHz), and up to 32bits at 384kHz in PCM and DSD2S6.

The AK4493 provides a fully-balanced output for low noise/distortion operation, and fed to a fully-balanced, iteratively-optimised, linear phase low pass filter formed by Tl LME49724 fully-differential amplifiers, Audio Note resistors and Wima precision capacitors. The balanced signal is fed to the line stage itself, formed from an ADI AD8056 dual Op-Amp - selected for its audio quality - and seated in an IC socket for interchangeability— known as "Op-Amp rolling".

The headphone amp itself is formed from an ADI OPA275 dual Op-Amp - mounted in an IC socket for interchangeability - together with two Tl LME49600 power amp ICs. The H PA output is direct coupled to the 6.35mm jack and presents an extremely low impedance to the headphone, reducing distortion and improving transient response.

1996 IEC 61938 standard recommends headphone amplifiers have an output impedance of 120 ohms. Here, the headphone power-amp is direct coupled to the 44 in jack, and a special circuit scheme is implemented to create high frequency stability ,and current limiting to 250mA suppresses damage on momentary short-circuit during jack insertion. The output impedance of the NU Audio card is a small fraction of an ohm. This results in tight, defined bass, and improved tone, especially those with rare-earth magnets which have a tendency to sterile tone.

AKM AK5572, a 32-bit 121dB capable Analog to Digital converter to faithfully transfer your content to the digital domain. As with the DAC, this IC is equipped with AKM's Velvet Sound technology and selectable high-pass and low-pass digital filters.

NU Audio provides a studio quality Line-ln interface, capable of recording at 384kHz if your PC and DAW is capable of handling the data rate. Input buffering is performed by a Tl OPA1652 dual op-amp, followed by low-pass filtering, and balanced drive to the ADC by Tl THS4551 fully differential amplifiers. This input is a very high-quality interface intended for use at the Line Level, for example, to record the output from a mixing desk, tape-recorder or external mic-preamp.

The NU Audio card is equipped with another independent input, which can be configured for Line Level signals, or for Mic Level signals, and has an inbuilt software-level control to ensure compatibility with a wide range of sources without the use of an external preamp. The Mic-ln is configured with a Cirrus Logic CS5346 IC, which is 24-bit 192kHz capable, with a maximum dynamic range of 103dB. Even the smallest details were not left to chance as the NU Audio card contains a variety of output/input options, switchable OP-AMPs, copper shielding, a passive heatsink, gold-plated PCB, and 10-mode RGB audio reactive lighting controllable through the EVGA NU Audio software.

From simple volume controls with a sliding headphone amplifier, to creating quick custom EQ profiles, the Nu Audio software avoids the clutter of features that you never use. Customizable audio reactive RBG lighting lets your music choose how your card looks from moment-to-moment.

"EVGA enters the soundcard market with a card that is equally at home as the centre of a high end Hi-Fi system, production studio or high end stereo gaming setup.

By teaming up with Audio Note, one of the highest esteemed names in the UK Hi-Fi industry, they have created a wonderful sounding card, with a powerful, full bodied tonal balance with an outstanding headphone amp that's both detailed and powerful, which will actually power even the most power hungry, high impedance headphones with headroom to spare. It's easily comparable to many high end external DAC units costing much more. The circuit design is optimised for sound quality rather than performance figures, the headphone amp for example, not having a resistor on the output, delivers much more power before saturation than the specs would have you believe. We were incredibly impressed as to how well it drove the flagship Audeze LCD-4 headphones to a good volume with detail that we would have expected from headphone amps costing many times the price.

So why is Scan's pro audio division interested in what looks like a consumer card? Firstly it uses the same XMOS chip as many of the leading usb interfaces including Focsurite Scarlett & Clarett, Presonus Studio and Audient ID series, and shares the same ASIO drivers with similar low latency performance. For anyone who does electronic production with midi instruments or mix work, it's a fantastic choice, as the converters and analogue circuitry are very much in line with what we would find in top end pro interfaces.

The headphone amp is above 99% of pro interfaces, it stands up extremely well against excellent Hi-Fi DAC/AMPs, with very similar detail and tone to the fantastic, but sadly now discontinued Audeze Deckard. This is normally the area that Pro interfaces do not give focus to, with them lacking detail and power to drive high impedance models, but Nu Audio is the total opposite of these interfaces, so there is no need to buy an additional headphone amp (starting at a similar price to the total cost of this card) for use with high end or high impedance headphones.

The analogue input (albeit being on a stereo 3.5mm jack) is incredibly quiet and well defined, incredibly well suited for uses such as sampling from vinyl, using a phono preamp or mixer.

For anyone predominately doing headphone based electronic music production or mix work on thier PC, this card is simply superb value for money.

The output from this card is on Hi-Fi industry standard phono connectors, but actually, the entire signal chain on the card is balanced right up to the phono plug connection for the lowest noise possible.

If connected to decent HI-Fi setup, studio monitors or a good set of headphones, its very likely going to be the strongest link in your signal chain." - Scan Pro Audio

I'm wondering whether the SATA connection is required to power the card or is it just for the RGB lighting?
Asked by: LLOYD1985
I'm not 100 percent sure, but feel it's needed for the card rather than the RGB. This card packs a lot of high end components whereas RGB lighting really doesn't require a lot of power....
Answered by: Coops71
EVGA Nu Audio PCIe Sound Card RGB Audiophile Grade