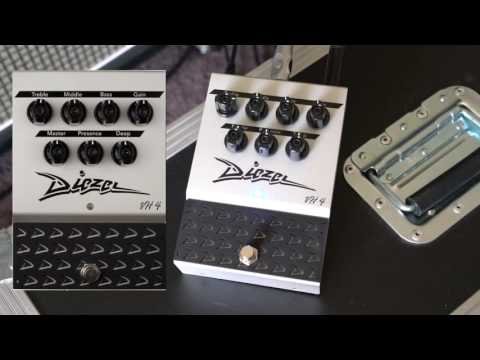 Scan code: LN76441 Manufacturer code: Diezel VH4
Share Facebook Twitter Google Reddit Pinterest LinkedIn
£244.00Item currently awaiting an ETA
Pre Order
Pre order
FREE DELIVERY ON YOUR ENTIRE BASKET
From £10.79 / month (APR 5.9%) or 0% for 4 months
If you are approved for a credit limit with PayPal Credit and use it for future purchases, the APR for those purchases won't be more than 21.9% and may be even lower. the holy grail of metal guitar tone Based on the legendary high-gain tone of one of the most sought after metal amplifiers of all time, the Diezel VH4, the VH4 pedal offers all the intense distortion you could need. Designed with the VH4’s ‘mega’ channel in mind, the pedal version has controls for Gain, Treble, Middle and Bass. Nothing new there you might think, but the scope on offer here is huge and offers superb control. Once you’re happy with the EQ, tinker with the Presence, Deep and Master controls to shape the bottom end and highs and find your metal heaven.

Immense sonic power The Diezel VH4 was first brought to the world in 1992, an all tube, 4 channel, high gain beast with a formidable reputation amongst the metal guitarist community. Used by artists such as Metallica, Korn, and Tool, it can be heard on some of the greatest heavy albums in history. The VH4 pedal is based on the third channel from the amp, the aptly named ‘mega’ channel, a stunning high gain channel, which offers unparalleled sonic wealth and clarity. If it’s crushing, biting tone you seek, look no further, the search is over, the VH4 pedal is here. Tough rugged housing Whether you’re touring the globe, preparing for some studio time, or you have a local show coming up, reliability is often one of the most important things to factor in when choosing the right gear. The Diezel VH4 pedal is built like a tank. Its metal housing is lightweight, but sturdy. Rather than an integrated circuit, the VH4 pedal uses discrete circuitry allowing for maximum sonic power. The VH4 is essentially the most fierce channel from one of the most sought after amplifiers in the world, in one beautiful pedal. Incredible.