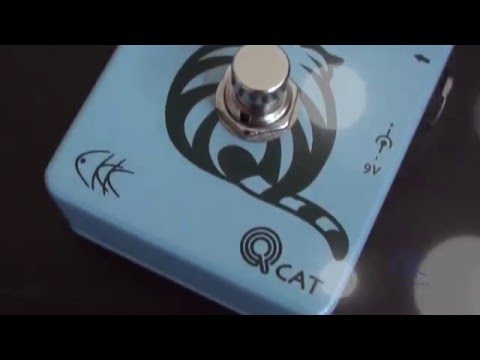 Scan code: LN72673 Manufacturer code: CL402
Share Facebook Twitter Google Reddit Pinterest LinkedIn
£85.00Item currently awaiting an ETA
Pre Order
Pre order
FREE DELIVERY ON YOUR ENTIRE BASKET
Delivery Options Services
Share Facebook Twitter Google Reddit Pinterest LinkedIn WhatsApp
Product Overview Q Cat is an envelope filter effect pedal. This effect is widely used, you hear it often appearing in various music but you might have missed it because you might think it is just plain wah sound. In fact, it is a special wah effect and it is neither an auto wah nor wah pedal with manual control. The basic principles of Q Cat is using the intensity and speed of play to control the wah filter to open and close. This equates to the cadences of dynamic change being the control factor which switches the wah filter on and off. So, Q Cat can combine the performance details and wah effect. The FREQUENCE knob can change the moving interval of the wah filter - in short, by adjusting the FREQUENCE knob counterclockwise, you can get sharp wah effects and this tone is suitable for playing funk music. You can also get low wah effect by adjusting the FREQUENCE knob clockwise, and this tone is suitable for playing solo. When you adjust the RESONANCE knob, the wah effect will transit from light wah effect to very intense double push wah effect. The RECOVER switch is used to select the opening speed of wah filter. Dynamic filter effect can be applied to all kinds of music, and also can be used with any other effect. When Q Cat is connected before an overdrive, you can play some sensible music like blues and jazz, and when Q Cat is connected in front of distortion or fuzz, it is suitable for playing some metal and aggressive music. Features • Use the Intensity and Speed of Play to Control the Wah Filter.
• The Perfect Combination of the Wah Effect and the Details of Playing.
• Adjustable Frequency Point of the Wah Filter.
• Adjustable Depth of the Wah Filter
• Selectable Opening Speed of the Wah Filter
Warranty