BirdDog Studio - SDI and HDMI to NDI Encoder
£708.00
Add To Basket
In stock 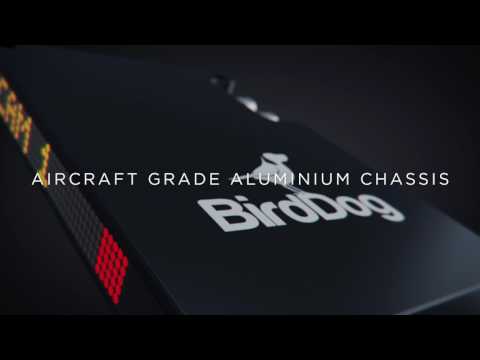 Scan code: LN75871 Manufacturer code: BDSTUM01
Share Facebook Twitter Google Reddit Pinterest LinkedIn
£708.00
Add To Basket
In stock
Order now and get it tomorrow, Tue 4th Aug
From £24.19 / month (APR 14.9%)
If you are approved for a credit limit with PayPal Credit and use it for future purchases, the APR for those purchases won't be more than 19.9% and may be even lower.

Full NDI Bit-rateBirdDog’s Studio NDI encoder and decoder is the ultimate, compact solution for enabling NDI within your workflow. BirdDog don’t just bring you NDI, but the full bit-rate NDI, instead of competition’s NDI HX, a compressed variation of the standard that reduces quality to compensate. The Mini doesn’t compromise, regardless of its size.

UncompromisingThis uncompromising attitude to NDI continues into the resolution support, with everything from SD to 1080p 60fps, you can pump anything through the HDMI or SDI port and scale it to suit your need into an NDI signal.

The Studio also has an HDMI and SDI output, so you can loop out the feed for previewing, so you don’t lose the HDMI port you’d be losing and don’t need to invest in a splitter.

Multiple Use Cases With the BirdDog Studio, once hooked into a local network (which could be as simple as connecting the source to the Mini and to your PC via Ethernet), it turns a once locked off, traditional source into a network point that vision mixers then pick up as a video source as you’d usually recognise. You don’t even need the traditional power adapter, as BirdDog devices can be powered over Ethernet with the correct switch in place.

Put it in Reverse Now with NDI Decoding included within all BirdDog devices as a free update, you can receive any full NDI stream and push it back out over SDI or HDMI. You can get your original sources around your network or location in a variety of ways, not just limiting it to a direct connection between your sources and BirdDog.

Perfect for Digital Signage As the BirdDog Studio's' NDI is far easier to fit into a digital signage solution, the Studio is actually a perfect addition to that type of workflow to begin producing signage across almost any display with just a lot less equipment involved. So instead of fitting large portions of SDI cabling or even fitting individual mini PCs (NUCs, Intel Sticks etc.), you can instead send the NDI signal to the Studio via Ethernet, which will then spit out via HDMI or if the monitor supports SDI and this can be done to multiple Studios with a central PC located on the local network in another location in the building.

PTZ, Comms, Central Control With BirdDog Central, you can get an even easier method routing the signal and the additional functionality with BirdDog’s Comms system for communicating across your setup. BirdDog also now make their own range of PTZ cameras, which of course come with full NDI functionality and a PTZ Controller.