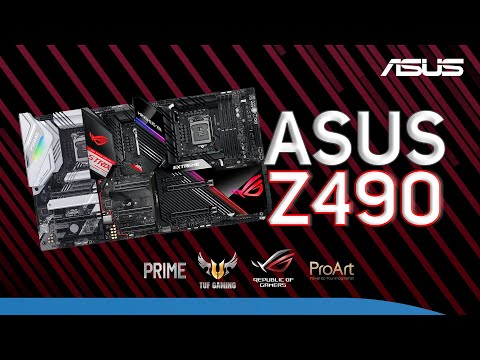 Scan code: LN107122 Manufacturer code: ROG STRIX Z490-G GAMING(WI-FI)
Share Facebook Twitter Google Reddit Pinterest LinkedIn
£224.99
Add To Basket
In stock
Order now and receive it by Wednesday, 16th June
From £10.80 / month (APR 14.9%)
If you are approved for a credit limit with PayPal Credit and use it for future purchases, the APR for those purchases won't be more than 21.9% and may be even lower. Get Yourself off to a Great Start Introducing the ROG Strix Z490 G-Gaming Motherboard from ASUS. The ROG Strix Z490-G Gaming (Wi-Fi) motherboard boasts boosted power delivery, an optimised cooling design and intuitive ROG software to help you get the most out of the latest 10th Generation Intel® Core™ processors. And it’s not just about performance, its cyberpunk-inspired aesthetics and a mirrored stainless steel Strix nameplate give it looks to match. 3.Upgraded
ChokesSuperior chokes and durable capacitors are engineered to resist extreme temperatures and provide up to 110% better performance than the industry standard. Sonic Studio IIISonic Studio supports HRTF-based (head-related transfer function*) virtual surround for VR headsets, casting an immersive aural landscape that draws you deeper into the action. The intuitive Sonic Studio interface also offers a range of EQ options and one-click presets, allowing you to tailor acoustics to suit personal preferences or the characteristics of your headset.

Sonic Studio Virtual MixerA virtual audio device that lets streamers combine sound output and output from different apps. This allows you to mix your voice and video game audio within streaming software. A variety of adjustment and monitoring tools provide a high level of digital control. 2. Q-LEDsFour onboard LEDs indicate power status, and any problem with the CPU, memory, graphics card or boot device for quick diagnosis.

ASUS ROG STRIX Z490-G GAMING Wi-Fi, Intel Z490, S 1200, DDR4, SATA3, Dual M.2, CrossFire, ax Wifi/2.5GbE, Micro-ATX is rated 5.0 out of 5 by 1.
Rated 5 out of 5 by yigames from Excellent board with many features I've always been really impressed with ASUS motherboards as they are completely robust and reliable. As i expected, the ASUS Z490-G is a very high end performance motherboard which offers a lot of features and technologies than other manufacturers. Great build quality. It supports the new 10th Gen Intel CPUs and offers 2 NVMe M.2 slots plus WiFi in built in. The cooling has been very intelligently designed taking into account their use of thermal pads and heatsinks throughout. I would advise to read the manual as could sometimes be a bit overwhelming to identify the many connectors/pins/slots. The BIOS offers a wide variety of settings and features, more than some other brands i have seen - so good to know ASUS are offering more control of the system especially the ASUS Aura feature which a very nice touch. Offers nearly everything from the ATX version (like for example Z490-F). Highly recommended motherboard despite the price.
ASUS Intel Z490 ROG STRIX Z490-G GAMING Wi-Fi Micro-ATX Motherboard