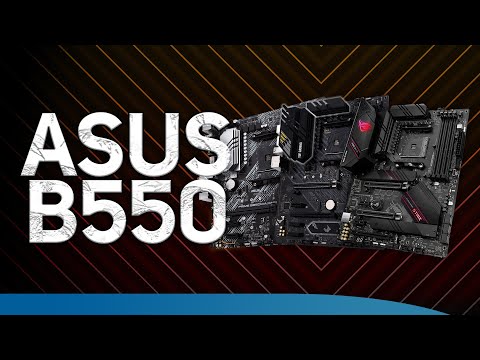 Scan code: LN108169 Manufacturer code: B550-F GAMING(WI-FI
Share Facebook Twitter Google Reddit Pinterest LinkedIn
£198.49Item overdue since 18 January 2021
Pre Order
Pre order
From £17.82 / month (APR 14.9%)
If you are approved for a credit limit with PayPal Credit and use it for future purchases, the APR for those purchases won't be more than 19.9% and may be even lower. SOLID HARDWARE SPECS FOR GAMING AND MOREThe ASUS B550-F Gaming with Wi-Fi is ready to power the 3rd Generation of AMD Ryzen Processors and well equipped with great features which you can find in the high end X570 motherboards. This will surely let you to take your gaming to an ultimate level of greatness. The B550 motherboards are PCIe 4.0 ready and come with a wealth of high speed connectivity options like Dual M.2 with heatsinks and even WiFi6 for fast wireless connectivity. The Rog STRIX B550-F Gaming (Wi-Fi) motherboard also offers rich customization options with lighting synchronization as well as guided performance tuning and optimization via intuitive ROG software that makes it easy for experienced and first-time system builders alike to create a gaming system with amazing RGB effects with AURA.

Higher Quality Cooling for Optimal performanceThe ROG STRIX B550-F GAMING Wi-Fi uses digital power control and a collection of power stages to ensure that you can utilise the power of the latest AMD Ryzen processors. The ROG STRIX motherboards use Pro Cool power connectors and superior chokes and durable capacitors which made to dissipate heat quickly and efficiently. The VRM and DRAM are controlled with ASUS DIGI+ power control which offers precise memory and voltage tuning for optimal performance and stability.

PCIe 4.0 Ready for faster speedsROG Strix B550-F Gaming Wi-Fi features two M.2 slots, one of which supports the latest PCIe 4.0 standard to provide maximum storage flexibility and the fastest data speeds available via the 3rd Gen AMD Ryzen platform. Both M.2 slots support up to the type 22110 socket and NVM Express® RAID for a performance boost. ASUS ROG STRIX B550-F GAMING (WI-FI), AMD B550, AM4, DDR4, PCIe 4.0, SATA3, Dual M.2, CrossFire, 2.5GbE/ax WiFi, ATX is rated 4.9 out of 5 by 14.
Rated 4 out of 5 by Hyro24 from Easy First Time Build I used this board for my first ever build and my first impressions were that it looked incredibly premium and well finished. While building I found the instruction manual to be very well thought out and precise while minimalist. I have had a couple issues with this board which have prevented me from giving it a top score which are: - While using 4 sticks of RAM the 3rd away from the CPU has a rogue RGB setting which does not sync with the others and continues flashing even with RGB switched off, I sent it back for an RMA but it seems that this only happens with certain types of RAM, I'm using Crucial Ballistix which has the issue but Corsair Vengeance worked just fine. If set up in dual channel this won't be noticeable. - Some of the sockets are very tight fitting to the cable or components that go in which made it difficult to install the graphics card the first time round and the USB 3.0 case connector gripped so tight that when I tried to remove it the plastic male connector split apart from the rest of the cable and got stuck in the socket, I had to remove this with pliers which took considerable effort. Overall I think this board looks fantastic with the high quality finish and easy to use manual being the selling points of this board over similarly priced competitors that offer extra features.
Rated 5 out of 5 by SomeReviewGuy from Expensive but good quality with excellent features A great entry into the B550 chipset from ASUS/ROG here. The WiFi-6 aerial has a good signal pickup range. Good choice of USB 3.0 and 3.2 on the back IO, as well as the 2.5G ethernet port. Do note that some latency issues have been reported with this Intel ethernet controller (Intel I225 V2). Doesn't seem to have much significant impact in games though. Only the ROG "eye" is RGB, which is a bit disappointing as this can be covered if you have a large air cooler. Would be good if there was another RGB strip near the motherboard power connector. There is a six pin and four pin CPU power connector, but it works well with just the single six pin connected. May be worth connecting both if you are doing very extreme overclocking (Custom loop or better for cooling) with a Ryzen 7 or 9. For most use cases only 6-pin is needed. Good number of motherboard headers, including 2xUSB2.0 and 1xUSB3.0, and several fan headers spread out across the motherboard. The power delivery or VRMs are of good quality according to experts, however the heatsink design is not the best, so you may see some high temps on the motherboard (This is generally not too bad, so long as it's under 100 Celsius). Overall an excellent motherboard offering, however it is definitely overpriced. B550 in general is a very expensive chipset, so you may want to look at cheaper offerings for both B450, B550 and even X570. I got this with the Asus Cashback deal (CPU+Mobo combo) making it a bit cheaper (about £20 off as Ryzen prices are a bit higher on Scan, and shipping on top).
Rated 4 out of 5 by pijec from Good quality board with the usual slightly invasive ASUS software Seems to be a pretty good board with a great feature set and decent IO. PCIE4 M.2 working as expected. Overclocking seems decent too but I don't have anything to compare against. Overall very decent motherboard. I don't really like how invasive asus software is so avoided installing any: just the drivers, and have had no issues at all without AISUITE or Armoury Crate. The EZ bios worked to update to a later AGESA which improved memory latency. Also a good thing is that the red ROG asthetic is kept pretty minimal. One frustrating thing is that the M.2 socket is right next to the GPU PCI-E release which makes pressing it a pain - seems like a bit of an oversight but rarely a big issue.
Rated 5 out of 5 by Ethan123 from Great Mobo With Cool Features and Stunning Looks Installing the Asus B550-F WiFi was a breeze, with clear and detailed on board descriptions, would highly recommend this over many other similar priced boards.
Rated 5 out of 5 by voo275 from Great board from ASUS I've used ASUS board for my last few builds as they always live up to expectations. There were a few teething issues out of the box but nothing a BIOS update didn't rectify and it's been flawless since coupled with a Ryzen 9 3900x
Rated 5 out of 5 by burnsy1993 from Great Value This motherboard cannot be faulted when it comes to build quality and features for the price. Would highly reccomend to anyone thinking about purchasing.
Rated 5 out of 5 by JakeT from Solid Honestly can not fault the build quality or the amount of features on this board, nice easy install and great to look at. 5/5
Rated 5 out of 5 by Gareth03 from Brilliant Motherboard Really great motherboard, full of features and looks great too.

Does this board have bluetooth

Asked by: Aaron1812
Yes, this board has Bluetooth 5.1, which is the latest version of Bluetooth. Note Windows 10 needs to be version 19041 or later to support this, otherwise it will only be Bluetooth 4.0 supported. As it uses the same antenna as the Wi-Fi, you can get good signal range via Bluetooth, especially with Bluetooth 5.0+ compatible devices.
Answered by: SomeReviewGuy
ASUS AMD B550 ROG STRIX B550-F GAMING (WI-FI) ATX Motherboard