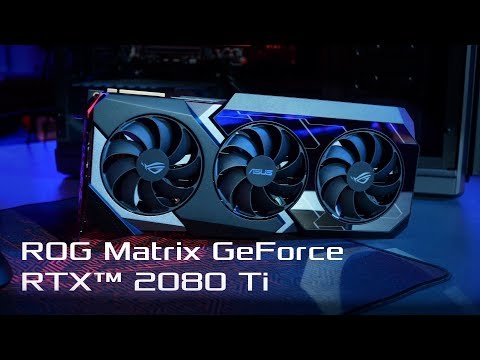 The Matrix name is reserved for exceptional products that leap forward, exceeding innovation and performance expectations. The ROG Matrix GeForce FTX 2080 Ti is the latest graphics cards to earn this pedigree by introducing Infinity Loop, a unique all-in-one closed-loop cooling system. Each card has been binned and tuned to deliver the best out-of-the-box Turning experience, raising the bar for graphics horsepower in small chassis and air-cooled builds.

Infinity Loop Cooling
The Matrix’s internal closed-loop water cooling system is the first of its kind. Combining the performance of an external closed-loop hybrid with the minimal footprint of a standard air-cooled card introduced many design challenges, such as miniaturizing a water pump to squeeze between the shroud and PCB. The effort paid off by delivering headroom to propel the Matrix’s clock speeds to a new level of performance for builds without custom water loops.

Deep Dive
With pump, tubing, and radiator integrated seamlessly under the shroud, the Matrix is cooler and quieter than air-cooled cards while taking up the same amount of space. An oversized heat spreader covers the GPU die and RAM to ensure the most critical components are kept cool. To top it all off, we included three of our industry-leading Axial-tech fans to push cool air through the radiator while simultaneously cooling the VRMs.

0dB Technology: Quiet Intelligence
The Axial-tech fans cooling the radiator can spin down to a complete standstill when the GPU core temperature remains below 55 Celsius, letting you enjoy light gaming in relative silence. As temps rise past the threshold, the fans automatically start up again.
*To activate 0dB mode, please engage Quiet (Q) BIOS mode by using the on-board switch.

Shroud Design: Suit Up
Strong, angular lines on the face separate geometric elements that come together to create a striking two-tone style. The reflective side of the card features RGB backlit tracings as an accent, aesthetically connecting the Matrix to top-end ROG motherboards. A Republic of Gamers moniker is implemented in an infinity display, subtly referencing infinity cooling loop.

AURA Sync: Outshine The Competition
The ROG Matrix GeForce RTX 2080 Ti features Aura RGB lighting on both the shroud and backplate. Sometimes you just want to turn off all the lights. That’s why we’ve outfitted the ROG Matrix GeForce RTX 2080 Ti with a convenient stealth mode button. Give it a press and you’ll instantly transform from a master of the colour-verse into a stealthy ninja.

Dual BIOS: Choose Wisely
Do you prioritize low core temps or low noise levels? Performance mode will let the fans spin up to keep the card running cool all the time. Quiet mode keeps the same power target and top-end settings, but offers a less aggressive fan curve for quieter operation at medium temps. For even more customization and control, check out our GPU Tweak II software.

GPU Tweak II: Monitor, Tweak & Tune
The ASUS GPU Tweak II utility takes graphics card performance tuning to the next level. It allows you to tweak critical parameters including GPU core clocks, memory frequency, voltage settings, and more with the option to monitor everything in real-time through a customizable on-screen display. From fine-grain performance tuning to advanced fan control, GPU Tweak II has all the tools you need to get the most out of your graphics card.

Quantumcloud: Profit from GPU Power
Quantumcloud is a simple and secure service that lets you effortlessly earn extra money by putting your idle GPU to work. Through an easy-to-use app, your computer can help run cloud-based applications, making you money in the process. Earning are automatically transferred to your WeChat or PayPal account, and your privacy remains intact because Quantumcloud doesn’t collect your personal data. Get started making money today!