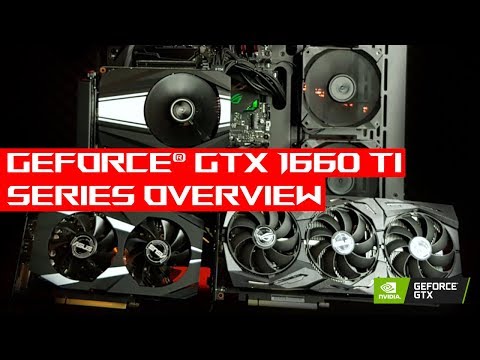 Geforce GTX 1660 Ti, Built For PerformanceThe Asus NVIDIA GeForce GTX 1660 Ti DUAL OC empowers NVIDIA's latest GPU with a serious cooling solution, setting the stage for high-stakes gameplay. An automated production process ensures reliability, tried and true fans let Turing's performance shine. And with an arsenal of utilities that allow you to customize and tweak this powerful hardware, you call the shots. With extensive testing the Asus NVIDIA GeForce GTX 1660 Ti DUAL OC has been rigorously put through its paces to make sure it's at it best, ready for you. This GTX 1660 Ti card is a perfect balance of simplicity and performance and with IP5X dust resistance protection will last longer too. Game at higher framerates with NVIDIA G-SYNC and eliminate screen tearing allowing you to enjoy games to their fullest. Up to 6 times faster performance The GTX 1660 Ti GPUs are powered by the Turing Architecture, this gives you 6x faster performance over previous-generation graphics cards. Turing uses a new 12nm manufacturing process bringing the latest most powerful GPU architecture to the GTX series.