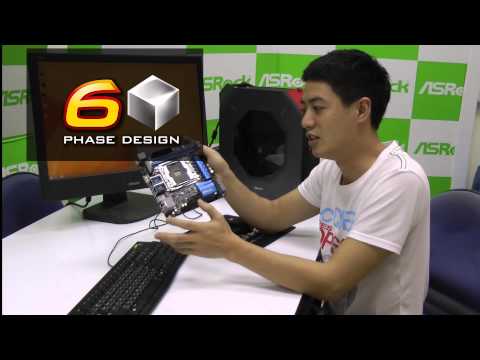 Fairchild 60A Dual Cool™ DrMOS
New improved MOSFETs that are more power efficient, cooler and capable of withstanding up to 60A currents.

2T2R 802.11ac WiFi
No one has time for weak WiFi signals and sluggish internet! That's why this motherboard comes with an exclusive 2T2R 802.11ac WiFi (2.4G / 5G WiFi) module that supports up to 867Mbps wireless networks and Bluetooth v4.0. Experience up to 289% speed boost compared to your old WiFi!

Ultra M.2 (PCIe Gen3 x4 & SATA3) - The World’s Fastest M.2 Socket - PCIe Gen3 x4
The onboard M.2 socket is a new interface for connecting Next Generation Form Factor (NGFF) SSDs or other devices. ASRock is the first in the world to implement PCIe Gen3 x4 M.2 socket on motherboards. The ultimate Ultra M.2 interface pushes the speed up to 32Gb/s which is 6X faster compared to other M.2 Gen2 x1 solutions that are limited to 5Gb/s.

Nichicon Fine Gold Audio Caps
ASRock applied Nichicon Fine Gold Series audio capacitors that every audiophile has been longing for on a PC! Compared with traditional solid caps, the leakage current of Nichicon audio caps is merely 10uA. This is the key to reduce noise level significantly and satisfy even the pickiest audiophiles.

TI® NE5532 Premium Headset Amplifer
TI® NE5532 delivers high definition audio to every headphone. Being the first one to add a headphone amplifier to the rear I/O line-out jack, this motherboard not only improves soundstage depth, but also enhances low frequency (20Hz) bass effects up to 10 times.

Surge Protection
Protects the motherboard from excessive surges from the power supply unit.

Lightning Protection
The onboard LAN chip is protected against sudden and violent voltage spikes caused by lightning.

ASRock APP Shop
ASRock APP Shop is designed for your convenience. We provide various apps and support software for users to download. You can easily optimize your system and keep your motherboard up to date with ASRock APP Shop.

ASRock APP Shop is the only all-in-one software package that delivers you the most practical PC apps and tools, in one integrated interface – from ASRock exclusive tools to the most update-to-date options of the latest technology.

USB Key
In a world where time is money, why waste precious time everyday typing usernames to log in to Windows? Why should we even bother memorizing those foot long passwords? Nobody has time for that! Just plug in the USB Key and let your computer log in to windows automatically!

UEFI Tech Service
Contact ASRock Tech Service by sending a support request from the UEFI setup utility if you are having trouble with your personal computer. Users may try to choose the category of the issue they have encountered, describe the problem in detail, and then attach an optional picture or log file for our technical support team.

Dehumidifier
Dampness kills most electronics, so it's a better idea to keep your personal computer dry. Now users may prevent motherboard damages due to dampness by enabling Dehumidifier. When it is enabled, the computer will power on automatically to dehumidify the system after entering S4/S5 state.

Easy Driver Installer
For users that don’t have an optical disk drive to install the drivers from our support CD, Easy Driver Installer is a handy tool in the UEFI that installs the LAN driver to your system via an USB storage device, then downloads and installs the other required drivers automatically through the internet. Completely no CD or optical disk drive required!

XFast RAM
ASRock XFast RAM fully utilizes the memory space that cannot be used under Windows® 32-bit operating systems. It shortens the loading time of previously visited websites, making web surfing faster than ever. And it also boosts the speed of Adobe Photoshop 5 times faster. Another advantage of ASRock XFast RAM is that it reduces the frequency of accessing your SSDs or HDDs in order to extend their lifespan.

XFast LAN
When Internet Explorer loads very slowly for no clear reason, it's usually due to inefficient management. ASRock is rolling out super efficient web management in the motherboard industry. XFast LAN is a convenient tool that controls internet related applications easily and efficiently. Creating a perfect Internet environment, all you need is a smart manager. ASRock XFast LAN allows you to enjoy more speed, easier multitasking, enhanced multimedia experience, and more – all without weighing you down.


New processors usually grab all the release limelight, relegating the supporting core logic and memory to mere footnotes. This time, a brand-new chipset and DDR4 memory are equal partners in the platform.


Intel's X99 is a long-overdue platform upgrade for the high-end consumer market. Despite delivering an incremental CPU upgrade from Sandy Bridge-E to Ivy Bridge-E, Intel determined the supporting X79 motherboard needed no such upgrade.