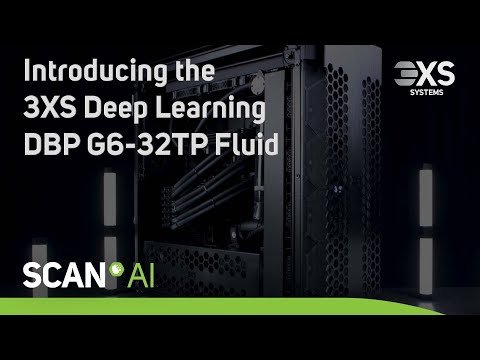 Scan code: LN120355 Manufacturer code: DBPG632TP
Share Facebook Twitter Google Reddit Pinterest LinkedIn
£21,699.98Item currently awaiting an ETA
Pre Order
Pre order
FREE DELIVERY ON THIS ITEM
From £507.11 / month (APR 5.9%) or 0% for 4 months
If you are approved for a credit limit with PayPal Credit and use it for future purchases, the APR for those purchases won't be more than 21.9% and may be even lower.

Scan Dev Box Pros are based on the latest NVIDIA Ampere-architecture GPU accelerators, providing you with maximum performance for developing and debugging your Deep Learning and Machine Learning models.

This development stage will help you identify the MVP (Minimum Viable Product) and learn valuable insights from failed models before rolling out your code to an NVIDIA DGX training system in a datacentre environment.

GPU Accelerators generate a lot of heat when training, and so an air-cooled deep learning workstation with multiple GPUs can get very noisy and be irritating to use in an office environment. The GPUs and CPU in this workstation are professionally water-cooled, making the system much quieter than a traditional air-cooled workstation.

The custom watercooling loop has been specially engineered for maximum reliability, including a redundant pump that will keep the system working in the event that one pump fails.

The system is soak tested with Deep Learning workloads and is pre-installed with the Ubuntu 20.04 operating system plus a custom software stack built on NVIDIA CUDA that includes Docker-CE, Nvidia-Docker2 and GPU-optimised libraries.

Ready to go software stack including Ubuntu and Nvidia Docker.

Anyone can build a PC, so what really makes the difference between any old PC and a 3XS PC? For starters, our team has been designing and building PCs for more than 20 years, so we have a huge amount of experience in building highly reliable systems that deliver the most performance for your budget. These are the benefits you receive when buying a professionally built 3XS system versus building a system yourself.

Unfortunately PC components do occasionally fail, and when this happens if you’ve built your PC yourself you’re on your own. However, with a Scan 3XS system you’re no longer alone.

Our 3XS PCs have won hundreds of awards in the press from publications such as Custom PC, Develop3D, Expert Reviews, HEXUS, PC Gamer and PC Pro.

F-series 3XS systems are pre-built and tested in our factory, so can be collected same day or delivered next-day to your home or office.

In the first year we can send an engineer to your home or office to repair it. In the remaining two years we'll still repair or replace any faulty parts, but do this on-site in Horwich, Lancashire.

Try before you buy