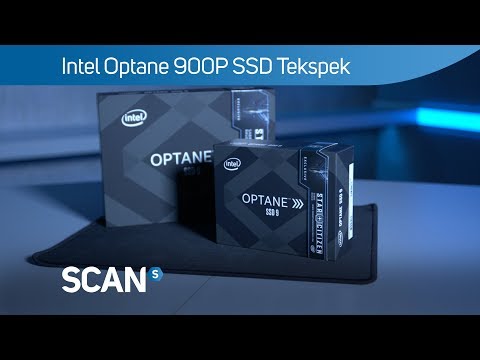 Scan code: LN85426 Manufacturer code: SSDPE21D280GASM
review
Share Facebook Twitter Google Reddit Pinterest LinkedIn
£380.99Item currently awaiting an ETA
Pre Order
Pre order
From £18.29 / month (APR 14.9%)
If you are approved for a credit limit with PayPal Credit and use it for future purchases, the APR for those purchases won't be more than 19.9% and may be even lower.

EXPERIENCE WORKSTATION CLASS PERFORMANCE The Intel Optane SSD 900p delivers workstation class performance and industry-leading endurance. This innovative storage drive is based on the new, ground-breaking Intel Optane technology, which includes the unique combination of 3D XPoint memory media with Intel’s advanced system memory controller, interface hardware, and software. With the Intel Optane SSD 900P, you can enrich your game play, fully experience your place in the galaxy, and soar to a new level. Superior Performance With the unprecedented level of realism in Star Citizen, you’ll want the responsive load times that the Intel Optane SSD 900P delivers. Load new planets and get fully immersed in deep space. Plus, the drive supports the seamless transition you’re called on to make from in-space dogfighting to on-the-ground combat.

5 year warranty In the Star Citizen galaxy, you can’t afford lag time waiting for critical data and information. The Intel Optane SSD 900P helps ensure you’re ready to respond and can act quickly in the game’s crucial moments. And whatever your role is in the galaxy, it requires rugged, reliable, and stable SSD performance. The Intel Optane SSD 900P comes with an Intel 5-year warranty for yet another level of protection in the Star Citizen universe.

Included U.2 to M.2 Adapter

Boost system performance This Intel Optane SSD 900P includes a cable with a hard-wired adapter to connect to an available M.2 PCIe slot. This SSD will not connect directly to U.2 ports on your motherboard without an additional cable (not included). If you wish to connect an Intel Optane SSD 900P to your mothebroard via U.2, we have an alternative U.2 model which includes a U.2 cable instead.

This PCI Express U.2 to M.2 adapter makes it easy to install a high-performance U.2 PCIe-NVMe SSD into your desktop PC or server and connect the drive through an M.2 PCIe x4 slot on your motherboard. By creating compatibility with newer U.2 NVMe SSDs this enterprise-class drive adapter enables you to gain faster read/write speeds and higher productivity levels for data-intensive applications.