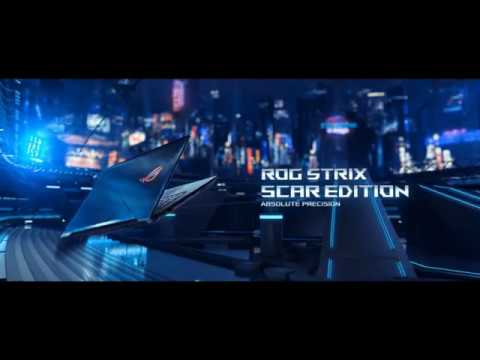 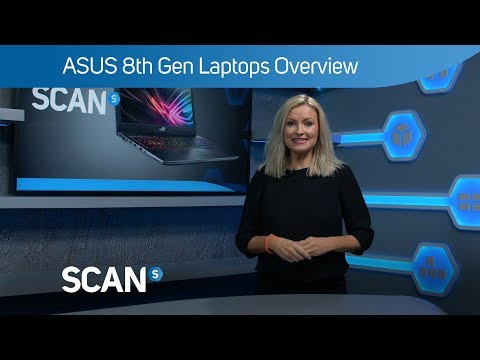 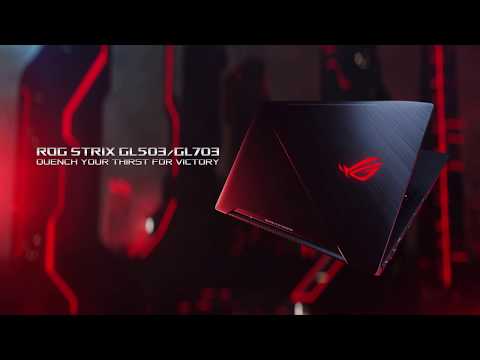 A MOBILE GAMING POWERHOUSEROG Strix SCAR Edition is built exclusively for the sharpest shooters in the meanest gunfights. This gaming laptop is designed to give you a competitive edge in high-paced Esports. Feel the power of Windows 10, the latest 8th Generation Intel Core i7 processors, and NVIDIA GeForce GTX 10-Series graphics and enjoy the smoothest and most accurate visuals ever on an IPS-level display with a 144Hz refresh rate, 3ms response time, and NVIDIA G-SYNC technology. Powered to take on the intense action of VR Gaming the ROG Strix SCAR Edition is capable of handling the intensity of fast paced shooter games with smooth, low latency and stutter free gameplay. With a desktop-style Aura Sync keyboard, N-key rollover and fast-actuating keys, Strix SCAR Edition allows you take out targets with absolute precision!

TWICE THE PERFORMANCE FROM LAST GENERATION The ASUS ROG Strix SCAR Edition features NVIDIA GeForce GTX 10-Series GPUs, the GeForce GTX 1070 supports Microsoft DirectX 12 and provides twice the performance from the previous generation of GPU’s, enabling the newest visual effects and rendering techniques for gaming experiences that are more realistic than ever before. CPU Intensive Games taken care of ROG Strix SCAR Edition is powered by up to the latest 8th Generation Intel Core i7 Processors for extreme performance. You can even upgrade your arsenal with a choice of NVIDIA GeForce GTX 10-Series graphics cards, choose from a GTX 1050 Ti all the way up to a GTX 1070. Whichever configuration you choose the i7-8750H processor will work with the graphics cards to bring you combat-proven computing power to rule the game.

SEE EVERYTHING WITH CLEAR AND CRISP VISUALS ROG Strix SCAR Edition enables you to see more clearly, with an IPS-level display, 144Hz refresh rate and a 3ms response time that will deliver smooth, accurate visuals, as well as reducing lag and motion blur. Give your aim an upgrade, sharpen your sights and let the Strix SCAR Edition take you to the next level.

Upgrade your Experience with Super-Fast Memory

KEEP YOUR PERFORMANCE UP WITH 2666MHz OF RAM Benefit from improved speed and lower power consumption with 16GB of DDR4 2666MHz dual-channel RAM. Gain an 11% performance boost over 2400MHz to take your gaming experience to new heights.
* Unique to ROG, the underside door on Strix SCAR Edition is the easiest way to access and upgrade your DRAM, as its secured with a single screw! TUNE UP YOUR SYSTEM AND CHOOSE YOUR STYLE Aura Sync technology gives you the freedom to customise and sync up light effects with Aura Sync-supported gaming mice, headsets, and other peripherals to give your entire gaming setup a consistent look and feel. With a full spectrum of colours to choose from, as well as seven different lighting modes that can be accessed via the Aura control panel, Aura Sync technology lets you express your gaming persona.

Stay Cool Under Fire The intelligent thermal design of the Strix SCAR Edition has a cooling system that improves airflow and system durability, it employs three fans that automatically adjust themselves to optimise CPU, GPU, and VRAM performance. Intake vents situated above the keyboard and underside of the chassis improve airflow into the system while the patented trapezoid-cut lid design doesn’t interfere with the air tunnels and the hot exhaust at the rear of the laptop.

KEEP YOUR SYSTEM CLEAN AND FREE FROM DUST The patented Anti-Dust Cooling system expels dust particles and dirt to improve system reliability and durability. In addition, the two main fans have been upgraded to 12V and spin much faster than regular 5V fans, boosting airflow and increasing air pressure to improve cooling efficiency.

Increased Surface Area for More Efficient Cooling The special copper alloy cooling fins used in Strix SCAR Edition are just 0.1mm thin, half the thickness of regular fins. Narrower fins allow for more fins to be used in the cooling module, this increases the surface area for heat dissipation by up to 8%, while at the same time reducing air resistance by 7%.

Select Different Modes for the Situation While the dynamic fans automatically adjust their speed according to CPU and GPU temperatures, you can select different modes to suit the situation at hand. Overboost is the most aggressive setting, with the fastest fan speed for the cooling required to fully exploit the power of ROG Strix SCAR Edition.

Built for Power and Styled To Compliment it Weapon-Like Finish and Styling Strix SCAR Edition has an anodised Gunmetal Grey 3D-weave design to mimic the feel of power that comes with high calibre weaponry and all this power is packed into a compact chassis with a thin 2.4cm profile, and an overall weight of just 2.6kg.

Fast, Accurate and Effortless Keystrokes to Up your Game

Absolute Precision with Every Keystroke With a brand-new desktop-inspired keyboard layout featuring four hotkeys, four customisable RGB-backlit zones, and ergonomic 0.25mm keycap curves that are comfortable to the touch the Strix SCAR Edition is built for fast gaming. The ROG-exclusive Overstroke technology enables earlier actuation and a longer over-stroke distance, enabling fast, accurate and effortless keystrokes that increase your actions per minute. There are also specially highlighted WASD keys and the N-key rollover feature which further boosts your precision, and with the action guaranteed for 20-million key presses you can count on staying at the top for longer. TAKE EVERY LITTLE ADVANTAGE TO HELP SECURE THE WIN With this immersive stereo audio, delivered through two expansive side-firing speakers even the quietest sounds can be heard, so you’ll pick up on every hidden movement. Smart-amplifier technology monitors the audio output and makes real-time adjustments, so you can pump up the volume without worrying about damaging the cones and that makes output up to 200% louder than before, with increased dynamic range and bass.

PC STATUS INFORMATION AT YOUR FINGERTIPS Summon the ROG Gaming Centre with a single press of a hotkey to see a detailed dashboard layout with loads of useful information, including both CPU and GPU frequencies and temperatures. You can access ROG GameFirst, GameVisual, Sonic Studio, Sonic Radar, Aura Core, as well as XSplit Gamecaster, through the ROG Gaming Center. You can even save different game settings and parameters in the cloud so you can access them even when you change laptops.