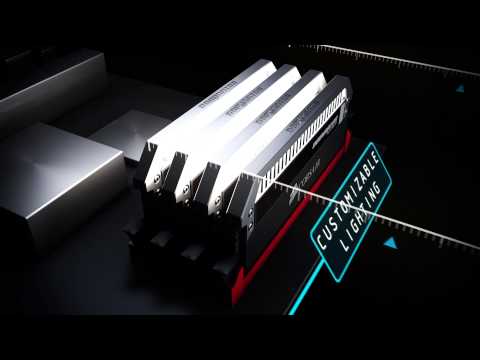 Scan code: LN66399 Manufacturer code: CMD16GX4M2B3000C15
Share Facebook Twitter Google Reddit Pinterest LinkedIn
£105.98
Add To Basket
In stock
Order now and receive it by Wednesday, 15th July
From £9.52 / month (APR 14.9%)
If you are approved for a credit limit with PayPal Credit and use it for future purchases, the APR for those purchases won't be more than 19.9% and may be even lower.

A mid-ranged level of memory density this 16GB of Dominator Platinum comes as a pair of 8GB memory sticks, each powered by both DDR4 and Corsair’s Platinum series! Purchasing this memory you can be sure you are gaining premium, reliable memory that can handle hard-core, next-gen gaming and has a good amount of storage room for the average desktop PC user. This particular set of Corsair Platinum RAM has a very high speed at 3000MHz and has still managed to keep a relatively low CAS latency speed. Running your games and media without interruption.

Custom PCB optimized for conductive heat transfer out of the memory Corsair have heavily designed the Dominator Platinum DDR4 around high-performance overclocking. Each module from the Dominator RAM series is built with highly-screened memory ICs and an eight-layer PCB, with further overclocking improvments through the efficient heat spreader that provides effective cooling.

These DDR4 memory sticks boast an eight layer PCB system. If your computer is trying to squeeze too much information into one layer then you are going to experience a significant rise in temperature. That rise in temperature will evetually cause overheating, resistances changes and things will stop working correctly - utlizing eight layers helps eliminate this problem.

Each computer memory module is equipped with numerous ICs or Integrated Circuits. Each IC in the Corsair DDR4 Dominator Platinum series is rigorously tested to check for defects in the technology. This is done by applying particular ‘patterns’ to them to see if the outcome has any faulty circuit behavior, and if so determine the cause of failure. Using the best of the best IC’s leads to highly overclockable memory.

XMP 2.0 is supported by both Dominator Platinum DRAM and Intel’s X99 and 100 series motherboards. Simply select XMP mode in the BIOS and it will automatically adjust to the fastest safe speed for the Corsair DDR4 Platinum kit. You’ll get amazing, reliable performance without lockups or other strange behavior. Enjoy trouble-free, automatic overclocking with the support of XMP 2.0.

The heat spreader on Corsair Dominator DDR4 memory is made of pure aluminum, creating a faster heat dissipation and a much cooler operation. Usually the overclocking overhead is limited by operating temperature, but not for the Dominator Platinum. Due to the unique design of the heat spreader, the temperature is continuously lowered as heat is pulled away from the ICs and into your system’s cooling path - allowing you to push it even harder! With the Dominator Platinum memory you can personalize your modules more than ever before. The Dominator Platinum Light kit contains all you will need to upgrade two memory modules to either Corsair signature Arctic White or Cerulean Blue illumination - or even one of each. Upgrade by simply removing the top bar and install a coloured lens before reattaching the bar. All needed tools are included. Both quiet operation and optimal cooling efficiency are built into the Dominator Airflow Platinum, plus for added customizing and control the fans work along-side the Corsair Link. The Airflow boasts a PMW-controlled duel fan (50mm) set-up delivering 10.6 CFM at 3,700 RPM each. In order to secure optimum durability at higher temperatures and quiet operation, rather than use standard sleeve bearings the fans use advanced ball-bearings.

The Dominator Airflow Platinum Fan kit is sold with various Dominator RAM or seperately, be sure to check

Reviews
16GB (2x8GB) Corsair DDR4 Dominator Platinum, PC4-24000 (3000), Non-ECC Unbuffered, CAS 15-17-17-35, XMP 2.0, 1.35V is rated 4.7 out of 5 by 3.
Rated 4 out of 5 by Corror from Not best for ryzen This isnt best product for ryzen. Cant be overclocked at all. Only XMP works
Rated 5 out of 5 by theandroids from Sleek RAM Very fast RAM and looks very clean in any build but, actually painted the heat sinks matte black metallic as the silver did not suit my plan.
Rated 5 out of 5 by JoshSargeG from Great, robust memory I've been using dominator ram ever since it became avaialble and I have never had any issues with it. It looks fantastic and suits almost any build style, and it performs robustly. Corsair in general make top quality products and this is no exception.
Questions & Answers

Does this come with a white lightbar already fitted?

Asked by: babysnakes
No it does not.
Answered by: JoshSargeG

Asked by: drifter
Hello, You haven't specified which Maximus Hero board you have but if it's VIII then this will support XMP and DDR4 so you will get the expected speeds. Regards,
Answered by: LizN
Corsair 16GB DDR4 Dominator 3000MHz LED Memory Kit for Skylake